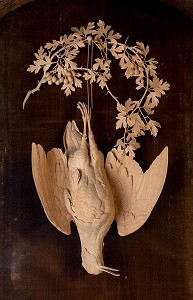 Carving of woodcock and vegetation 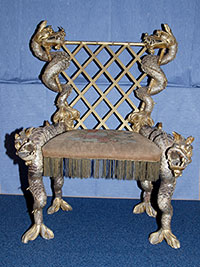 Born of an impoverished cabinetmaker in Hull, he had to leave school when only 9. At 13 he was apprenticed to carver and gilder Thomas Ward, and attended drawing classes and art lectures at Hull Mechanics’ Institute. During that time he worked with Thomas Ward at Burton Constable Hall. After receiving his indentures in 1841 Wallis became a journeyman and carved the Dragon Chair to the design of Lady Constable. He also did ship carving at Gainsborough and travelled by steamer to London to purchase his own carving tools; these ranged from 2½ inches to a twentieth of an inch wide.

Looking to set up his own business he undertook work at Walmsgate and Tathwell for gilder John Brown of Upgate, Louth. When John Brown died in 1844, Wallis took over Brown’s shop and in the next year he married Susannah Crow the daughter of the publican of the Black Bull next door to the shop. During this period Wallis sold his first carving, he sketched the view of St James’ Church from Upgate, and painted a self-portrait – he was only 24.

Wallis’s first patron was George Tomline MP of Riby Grove who had a house in London, which led to other commissions including from the USA, for carvings of dead game birds. Wallis’ method was to first make a model in pipe-clay on a wire frame, and then he made the carving from a single block of limewood. He also carved flowers and fruit. He won his first medal from the Society of Arts in 1850, the year he became Honorary Curator of Louth Mechanics’ Institute.

For the Great Exhibition of 1851 he submitted 7 carvings of which ‘Trophy of Spring’ was awarded a medal. It was his most intricate carving, it took him 8 months to complete and was considered to surpass the work of Grinling Gibbons. Wallis also won medals at the 1855 Paris Exhibition and the London Great Exhibition in 1862.

Wallis’s autobiography lists 72 principal carvings, including gargoyles for Louth Market Hall in 1867. Sadly in 1858 he had damaged his eyes when observing an eclipse of the sun through inadequately smoked glass, fearing loss of sight, Wallis finally gave up detailed carving in 1874.

He then taught himself land surveying and carried out work for the Drainage Commissioners, was Louth Borough Surveyor for 8 years and Public Health Inspector for 20 years. During that time he continued drawing and painting, including 3 self-portraits in oils when he was 76.

His grandson Harry Wallis Kew was a founder of the Louth Naturalists’, Antiquarian and Literary Society in 1884 and the Society has run Louth Museum since 1910.

The medal-winning Trophy of Spring carving was bequeathed to the Society and returned from California to Louth Museum in 2015.  [See also Blog Post dated September 2019, 'Wallis Carvings'.]