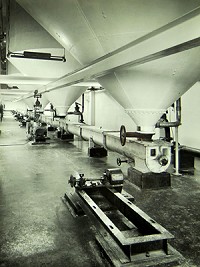 Inside the malt kiln

In 1950 a new Malt Kiln was built in Louth to replace the previous one which had been destroyed by bombing in 1943. It was a good location, as the surrounding farms produced barley, and the location at the railway station allowed easy transport of both the barley and the end products of malting.

Malting is the first step in turning barley into beer. In malting, barley is soaked in water to make it germinate, and then germination is stopped by drying with hot air. This process develops enzymes in the grains which turn the starches into sugars.

The 1950 Malt Kiln was large and modern, and constructed from concrete. The interior was state-of-the art. Some admired it, but many thought that the “Concrete Cathedral” was a blot on Louth’s landscape.

The current demolition of the Malt Kiln is drawing spectators of all ages who are mesmerised as the great machine appears to eat the structure, and crawls on the growing pile of debris.

Louth has lost its Concrete Cathedral, but has regained a view of the façade of the Railway Station.