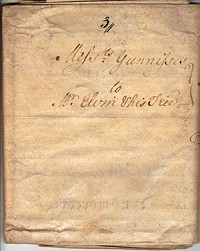 Out of the blue we had an email from a gentleman in Devon asking if we would like an Indenture relating to Louth. A few days later we received though the post this wonderful Indenture hand-written on vellum.

The indenture is dated 1775 and relates to the sale of Louth’s Fleece Inn. In a large number of complex words, it documents the sale of the Fleece Inn in Louth Market Place from Alexander and Freshney Gunniss to John Elvin and Robert Lee.

The Golden Fleece Inn was on the Market Place in 1775. But in 1936 the inn relocated to its present location in the former inn yard, and the Market Place frontage was sold and converted into Woolworth’s store. It is now “Bargain Buys”.

Another historical document in Louth Museum also mentions property-owner Robert Lee, and we speculate that Lee Street took its name from him.

The donor of the indenture, Mr Varley, told us that the document had belonged to an elderly relative who had worked for a property agent in London. It is thanks to people like our munificent donor that Louth Museum has such a rich heritage of treasures.