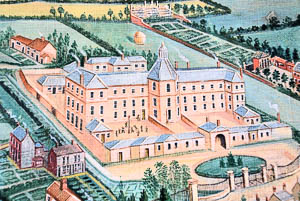 In any history it is easy to focus on the more prosperous and successful members of society; to redress this I decided to examine the life of someone less fortunate. I chose at random from the inmates of Louth Workhouse listed in the census.

Eight-year-old Betsy Panton was in Louth Workhouse in 1861 along with her two older sisters – why was she there, and what happened to her afterwards?

Betsy had been born on 26th December 1852, and was christened “Elizabeth Stote Panton” in St James’ Church. Her parents were Elizabeth and John Panton, and they lived in a small cottage in Cisterngate off Broadbank. John was an agricultural labourer.

By the time Betsy was 8 years old, there were six children in the family: Mary, Charlotte, Betsy, Frances, John and Eliza. It was then that tragedy struck – mother died (she was only 29) and the household disintegrated.

The three eldest girls, Mary, Charlotte and Betsy were sent to the workhouse, six-year-old Frances lived with her father, four-year-old John went to live with his grandparents, and two-year-old Eliza was boarded out with another family.

Probably when she was fourteen Betsy left the workhouse and entered into domestic service. At the age of 18 she was the living-in servant with the family of house-painter Thomas Ward Markham in Eastgate, in what is now part of the All Seasons Apartments.

Betsy became pregnant before she was married, as had her mother a generation earlier. For unmarried mothers without family support, the workhouse was the only place they could go during and after the birth of their child. So Betsy had to go back to Louth Workhouse for the birth of her baby, who she called Tom.

A year later in 1874, 21-year-old Betsy married 22-year-old Thomas Joseph Waltham in Louth. He was a baker, born in Grimsby. Marriage gave Betsy a home and some respectability.

Betsy and Thomas Waltham had a large number of children, probably fifteen, of whom six died in infancy. The family lived in several places – Hartlepool in County Durham, Grimsby, Louth and Skegness – before settling in Wisbech, Cambridgeshire. Thomas became a successful baker with his own business, and Betsy was described as a confectioner.

There are few other details of the lives of Betsy and Thomas Waltham. The only relevant newspaper report informs us that in 1885 Thomas Joseph Waltham of Skegness was fined five shillings for not sending his children to school. This was not uncommon. In 1880 school attendance became compulsory for children until they were 12 years old. Many families resisted schooling as they had to pay a small fee for each child, and also older children were needed to help at home or to undertake employment to assist family finances.

Betsy died in Wisbech in 1901. Her youngest surviving child, Sidney, was then 8 years old and, presumably because there were older children to maintain the household, the family did not split up. At least three of Betsy’s sons followed their father’s trade and became bakers.