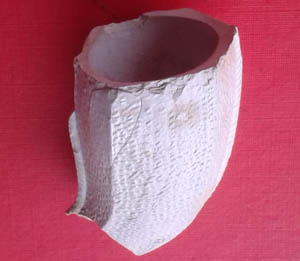 When I came into the museum last week, I found a neat little package awaiting me. It contained the bowl of a clay pipe, and information about how it was found buried beneath a hedge in Little Grimsby.

The size of the bowl and nature of the clay help us to date this pipe. The maximum diameter of the pipe bowl is 15 mm, and its height is height 35 mm. This makes it a relatively large bowl.

Clay tobacco pipes were first made in England in the 16th Century shortly after the introduction of tobacco from North America. Because tobacco was so expensive only a very small quantity of tobacco was smoked in each pipe, and for this reason the first pipe bowls were tiny with a diameter of only 7 or 8 mm. As tobacco became more widely available, the size of pipe bowls increased.

Our pipe bowl is made from pure white clay, probably originating in Devon. In the 19th Century white clay was being used, and not the duller yellower clay typical of earlier pipes. Also our bowl does not have a little “heel” or “spur” beneath the bowl, a feature of earlier pipes.

During the late 19th Century cigarettes, cigars and the more robust meerschaum and briar pipes became common. By 1914 the clay pipe industry had largely disappeared at the local level and only a few large manufacturers continued.

I am definitely not a fan of smoking, but I find clay pipes interesting. If you are knowledgeable about clay pipes, and by looking at the decoration or other detail on the bowl can give a more accurate dating than “19th Century”, or a place of manufacture, we would love to hear from you!