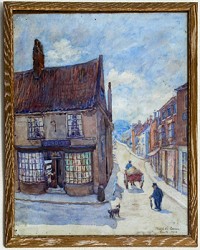 There used to be two printers in Mercer Row. Gouldings had the bow-window shop next to Pawnshop Passage, and Burditts were at the junction of Mercer Row and Upgate, next to what is now Co-Jo’s. Burditt’s premises were demolished in the early 20th century.

A few days ago David Robinson donated this picture to the museum. It shows Burditt’s shop at No 2 Mercer Row with its two bow windows fronting Mercer Row. To the right is Upgate looking south. Burditt’s premises stretched back along Upgate towards Kidgate. The picture was painted in 1912 shortly before the building was demolished. The reason for demolition was that Upgate was very narrow as can be seen from the picture, and needed to be widened to accommodate the increasing volume of traffic in the town.

The bollard on the corner outside the shop was there to protect the building from damage by turning vehicles. Until about 1830 the boulder standing there had been the enormous “blue stone” which is now on display outside Louth Museum in Broadbank. That's why this corner was and sometimes still is known as “Bluestone Corner”.