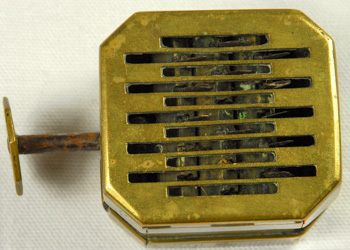 In the Town Gallery of Louth Museum is a Scarificator, which is a bloodletting device that was used in the early Victorian period and was thought to cure many illnesses. The local physician would have come to your home, he would ask you your symptoms and would use the blades and let blood.

The Scarificator is made up of three main parts. The button releases the spring, activating the blades, which then cut into a main artery to let blood. Our Scarificator has 16 blades. For each illness there were specific places on the body where blood would be taken, and recommendations as to how much blood needed to be taken.

There was a special bowl that the physician used to collect the blood. This bowl was either decorated or just plain. It would have numbers marked on so the physician could measure the blood.

This method of blood letting often caused disease and blood poisoning because the blades were not properly sterilised. This is because not much was known about bacteria in this era. Germ theory was not fully developed until the 1870's, and the physician would often just wipe the blades clean or rinse them under cold water.