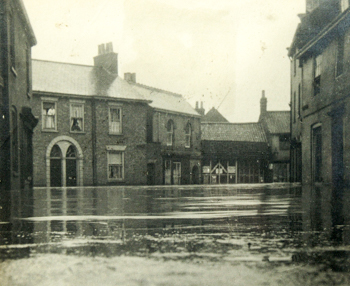 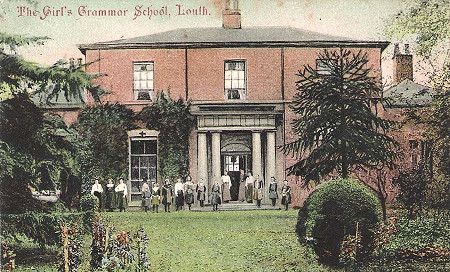 Girls outside The Limes in Westgate

We have recently been given the following account of the Louth Flood in 1920. It was written by 15-year-old Elisabeth Vellacott who was a boarder at King Edward Grammar School for Girls, and was living in The Limes in Westgate. The following extracts are from Elisabeth’s weekly letter to her parents written on Sunday 30th May the day after the flood. We are very grateful to Mrs Margaret Boston of Cockerington for donating this item to Louth Museum. Elisabeth Vellacott later became a close friend of Ian Boston’s family.

“I’ve got some news this week! An awful catastrophe happened in Louth yesterday. I’m not going to exaggerate a bit, so you can believe every word I say.

It began with a terrible thunderstorm which started at 2.00 pm yesterday and lasted till late evening. The river burst its banks, and as Louth is in a hollow, the lower parts are swamped with dirty water. In most streets the water is or rather was (it’s gone now) up to the bedroom windows. Chairs and tables went floating down the streets. And sometimes a chair, floating about inside a room would break the glass and sail out. The water came within 50 yards of The Limes. We stand on a little rise so we were all right.

A very brave man, Dr Lanthorn-Smith, found an old canoe which would hold only one person and, paddling with a shovel, tried to rescue people from the houses. But the current was terribly terribly terribly strong, and he couldn’t control the boat properly. And he couldn’t even swim! Wasn’t he awfully brave. His kids come to our school.

The worst of it is that nothing at all could be done. Because there were no boats in the town, the river being only a small one, so people could only watch and wait. When the flood went down, a thick coating, inches thick, of dirty shiny black mud covered everything; the homeless people were housed in houses which had escaped, and all our mistresses were trotting round taking dry clothing and food to the poor people.

We thought we never should get to sleep last night, somehow we were so wide awake, and we couldn’t help thinking of all the poor people without any homes. It is still raining but not much, and I expect the water will mostly have gone now.”