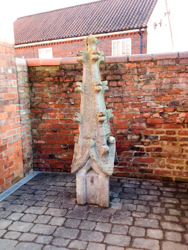 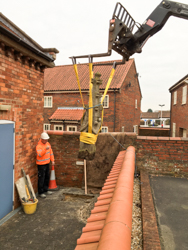 This year visitors to Louth Museum cannot fail to admire the stone pinnacle recently installed in the outside courtyard. It was brought to the museum early one morning by Rodden and Cooper, dangling from the arms of a telescopic handler. The medieval pinnacle has spent several decades in the garden of David Robinson in Eastgate, and before that it was in a garden in Edward Street. But as you may imagine the original location of this pinnacle, which was probably carved in the 1430s, was on the nave of St James’ Church. In the 1860s when James Fowler, the Louth ecclesiastical architect, was restoring the church this particular pinnacle was removed and replaced because one side had become seriously worn away by weathering. We are grateful to the previous custodians of the pinnacle for preserving it and to Andy Cooper for his expertise in relocating it to Louth Museum.