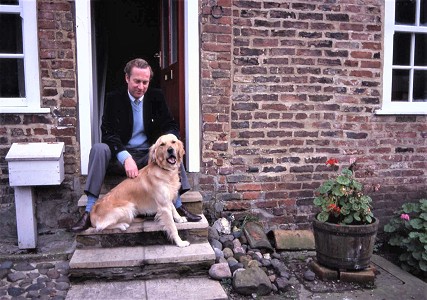 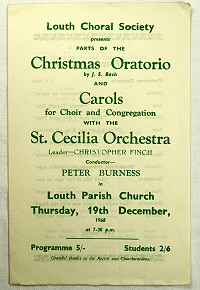 Concert conducted by Peter Burness in 1968

Louth Museum has such a rich and varied collection because people generously donate items to us.  Recently Ken James gave us digital copies of photos of Louth, many of which are views he took from the top of St James’ tower in 1982.

This (ground-level) photo taken by Ken shows Peter Burness sitting with his dog on the doorstep of his house in Westgate Place.  Peter was organist at St James’ for 30 years from 1966 until 1996.

Ken wrote, ‘Peter was a popular schoolmaster, choirmaster and organist.  I worked with him at King Edward VI Grammar School when I was a governor and warden, and as a member of Louth Choral Society.  My late wife Margaret had a “doggy” bond with Peter, which I think was common with those who regularly traversed Westgate Fields and Hubbards Hills.

‘Peter conducted his first choral concert, Handel’s Messiah on 9th December 1967. His last concert with Choral was on 8th April 1990, and included the Rutter Requiem. During his tenure we participated with other Lincolnshire choirs on three occasions at the cathedral, with conductors such as David Wilcocks and Philip Ledger, as well as major works, together with Boston Choral Society, at the Stump and Carmina Burana at the Embassy, Skegness. I was fortunate to be chairman during the last 10 years with Peter.

‘He took over the post of Head of Music at KEVIGS, I assume, in September 1967 and remained in post until retirement.  He moved to Drayton, near Selby some years ago, and was assistant organist at Selby Abbey for a while’.