Cromwell House: its structure and function 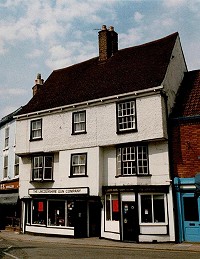 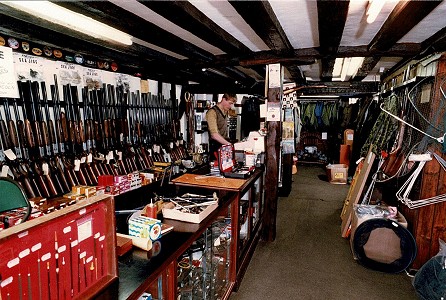 Interior when it was the gun shop

Cromwell House, located at the junction of Mercer Row and Upgate, is believed to be the oldest house in Louth.  It is a medieval three-storey timber-framed house with a steep pitched roof, and jettied first and second floors front and back – in other words the upper floors overhang the lower rooms.

This house may have been built as a rich mercer’s or draper’s house and shop. On the other hand, it may have had a more administrative function, as outlined in the following comments from a report by former buildings inspector, Christopher North:

"The strongly constructed frame and crown post roof construction indicate that this is a late 15th century building. Its position at the corner of Upgate and Mercer Row was a very deliberate one for maximum impact. The front and rear jetties suggest that this building was intended to oversee the main streets and the market place behind. Most likely, it was flanked by two-storey structures, but the fan bracings of the upper gables were intended to be seen from the street. It clearly was a building of local importance."

“The frame consists of two bays with a central heated half-bay, and the central half-bay was designed to carry the heating arrangement and staircases.

“The upper rooms were all heated, which is unusual, and the two upper chambers were designed to be open to the ridge. The central crown trusses are very elaborate with braces to the collar, purlin and down to the tie-beam; certainly designed for show. The tension wall braces on the upper floors are also set to be seen from the inside. These arrangements indicate that all the upper rooms were intended for public use or at least visitor access.

“The quality of the framing and the internal timber decorations suggests that this building had a social function rather than a purely domestic one. The location of Cromwell House near to the church lends itself to having been possibly used on occasions as a medieval guildhall, except that the rooms are rather small for large suppers which would have required a long chamber.

“Louth, of course, belonged to the Bishop of Lincoln. I postulate that Cromwell House might have been a bishop's administrative centre for Louth with chambers for clerks dealing with the activities of the church of St James, meetings with the mercantile tenants (the burgesses) and for the officials of the market and fairs. This would most likely mean that the carpenter was a bishop's man brought into Louth to construct this special building. This was a regular practice elsewhere, for example among the buildings of Bury St Edmunds abbey scattered across their various properties.

"If this was the building from which the market was controlled, then it would also have been the place where a full official set of weights and measures was kept. The market stallholders would have been obliged to come and have their weights, yard lengths, quarts and pint pots tested against the standards issued by the State.

“It is sometimes said that the reason why this building is known as Cromwell House is that Oliver Cromwell stayed overnight here on his way to the Battle of Winceby in 1643, but we have seen no documentary evidence for this.  An alternative (and also unproven) hypothesis is as follows. After the removal of the authority of all bishops in October 1646 by the Long Parliament, the building's ownership would have been 'secularised', so it was renamed as a nod to the man who was really in charge of the country by then.”   However, Richard Gurnham commented, “I have not found any evidence that the building was referred to as Cromwell House in the seventeenth or eighteenth centuries, and I think it is a fairly late invention.”

We know that Cromwell House was in the 19th Century the premises of a bakery, and later Louth Leather Company, a fish shop and The Lincolnshire Gun Co.  It is now a restaurant, so you can dine in this historic building!