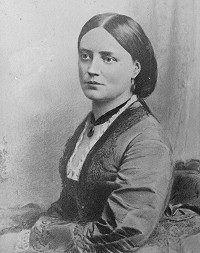 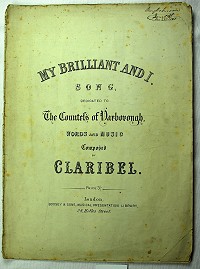 Claribel (Charlotte Alington Barnard, née Pye) 1830 – 1869 has been described as ‘one of the most commercially successful ballad composers of the 1860s.  Her songs were to be heard in British and American homes for the rest of the century, despite her early death.’ She was born and brought up in Louth, in a middle class Victorian home.  Although she lived in London for a few years when she was first married, she spent most of her life in northern Lincolnshire, and much of her social life was in Louth.  Claribel had started writing poetry as a little girl – one of her earliest recorded poems ran to 20 verses! Although she wrote both words and music to some ballads, she often wrote her music for the words of some of the most famous poets of the day.  Among these were Tennyson, Charlotte Bronte, Longfellow and Charles Kingsley.  In the ten years between the publication of her first piece and her death (at the age of 38) almost 100 compositions appeared on publishers’ lists.

Today the only song of Claribel’s which is widely known is ‘Come back to Erin’.  However, it is usually called an Irish folk song, and is found in many folk song collections.  In the early years of the 20th century two of the foremost singers of the day made recordings of this ballad, more than 40 years after Claribel’s death.  The recordings of Nellie Melba (later Dame) and John McCormack are still available – fortunately transferred from wax cylinder to more modern media

In the 1860s and the later part of the 19th century her ballads were performed by the most famous singers of the day.  Before downloads, CDs, vinyl or even wax cylinders were thought of, live concerts were the only way of hearing new songs.  Boosey and Sons (now Boosey and Hawkes), a major music publisher, put Claribel under contract, which was quite unusual at the time.  By the late 1860s they had about 45 of her works in their catalogue.  Some were set as duets, some had been arranged as piano solos, and some were in albums of songs.  This compared with 9 songs by Arthur Sullivan (later knighted, of ‘Gilbert and Sullivan’ fame) named in ‘Boosey & Co’s list of Popular Songs’.

Then, as now, there was friction between ‘serious’ and ‘popular’ music.  Music critics described Claribel’s ballads as ‘mawkish’ and ‘trashy’.  Audiences, on the other hand, demanded encores whenever they were performed.  Not for nothing were they known as ‘parlour songs’.  With the availability of sheet music and pianos in Victorian homes, Claribel’s songs found a wide and appreciative audience.  They were not too difficult to sing, and the piano accompaniment was relatively easy.  Some songs were so well-known they could be parodied, and even contemporary cartoons referred to them.  Her first published ballad, from ‘The Brook’ by Tennyson, was the subject of a cartoon in 1866.

Charley (to fair cousin): If that’s the case, I shall be one of the men that go!

Claribel was the third child of Henry Pye and Charlotte (nee Yerburgh).  They lived at The Cedars in St Mary’s Lane, Louth.  The house, which still exists, is well shown in Brown’s Panorama of Louth.  Two figures in the garden could be a teenage Claribel and her mother.  Her two older brothers had both died, one at a few hours old, and the other just 12 days old.  Her mother died when Claribel was only 17.

Henry was a solicitor and businessman in Louth.  He also held several public offices, so was very well-known in the area.  Her mother, Charlotte, was originally from Frampton, near Boston.  The family name Pye was taken by Claribel’s father, Henry Alington, under the terms of the will from which he inherited the fortune of his aunt Sarah Rowe.  Henry remarried just two days after Claribel’s wedding.  His second wife was Lady Albina Francis Hobart, a woman with her own fortune.

Claribel married Charles Cary Barnard in 1854.  She had been engaged twice previously.  Although not an ‘arranged marriage’ in the sense we might understand today, Claribel’s marriage to Charles Barnard was certainly arranged by her family.  One engagement had been to John George Holloway, a London barrister, whose family lived at Gunby Hall about 20 miles south of Louth.  Claribel’s father felt this was not a suitable match! Charles was rector of Ruckland, and Farforth with Maidenwell, although Claribel and Charles lived at The Firs in Westgate, Louth when they were first married.  In 1857 they moved to Pimlico, then a fashionable area of London.  It was here that Claribel met other musicians, had lessons in piano and composition and wrote her first published pieces.  By 1864 when she and her husband moved to Kirmington Rectory, Claribel had become one of the most popular composers of the day.  She continued composing until 1868.

Claribel died in Dover in January 1869, of typhoid fever.  She is buried there.  Claribel’s father had many business interests in Louth and the surrounding area, as well as being a land speculator and County Treasurer.  However, in the summer of 1868 he was exposed as an embezzler and declared bankrupt, having siphoned off county funds and owing large sums on mortgages and small sums to his servants.  Henry Pye, accompanied by his second wife and their young daughter, fled to Belgium.  Claribel and Charles joined them there, Claribel herself having lost about £30,000.  She and her husband returned to England at the beginning of 1869 for a holiday, but she became ill and died after a short illness.  Charles Barnard remarried, and lived to a ripe old age, having fathered six children.  Henry Pye remained in Belgium, his lifestyle supported by his wife’s fortune.