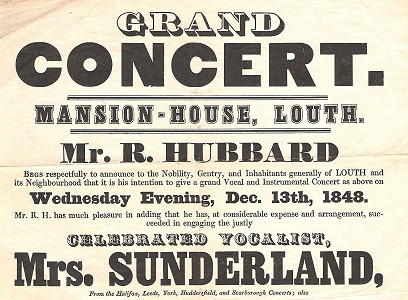 Poster for concert in the Mansion House

It is great to see the Mansion House, 12 Upgate, being renovated and restored to its former dignity. It is a Grade II listed building with a long history. Many people remember when it housed Louth Public Library in the second half of the twentieth Century, but it had other roles before that.

The Mansion House was built about 1750 by the Louth Old Corporation as the Assembly Rooms, and it became the centre of civic life for the gentry; then from 1853 until 1956 it was the Louth Mechanics' Institute - Mechanics' Institutes were educational establishments aimed towards working men.

In Louth Museum, we have a copy of a poster advertising a Grand Concert in the Mansion House on 13 December 1848. The concert was organised by Richard Hubbard, an "engraver and professor of music", who at that time lived in New Street, Louth. Richard's older brother was the well-known portrait painter Bennett Hubbard.

The following week, the Stamford Mercury newspaper dated 22 December, printed a very positive report of the concert, concluding, "Mr Hubbard received the most flattering evidence of appreciated native skill in getting up for the public so brilliant an entertainment".