Sampler made at Kidgate School 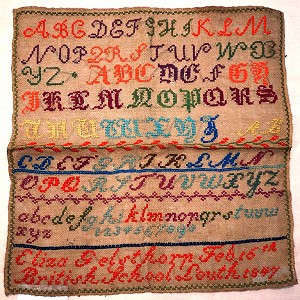 This early Victorian sampler was created in 1847 by a 12-year-old pupil in the British School, now Kidgate Primary Academy. We know this because Eliza Gelsthorp embroidered her name and other details. Worked in the traditional style with the alphabet in four different scripts, and the numerals, the sampler is bright and cheerful.

The British School had opened in 1840, only a few years before Eliza worked her sampler. Initially there were 310 pupils, but only two classrooms – one for the 150 girls and the other for the boys. In the decade after Eliza was at school numbers had risen to 450 pupils, and the buildings were extended. Conditions must have been extremely cramped. Sewing was an important part of the curriculum for girls. We have a number of Victorian samplers in Louth Museum, but this one stands out because it is so vibrant in colour indicating that it has been carefully stored out of direct sunlight. We may tend to think of the early Victorian period as being monochrome, but this sampler clearly shows that bright colours were around.

Eliza was the daughter of John and Frances Gelsthorp who lived in Walkergate, now Queen Street; John was a farmer and leather manufacturer. Eliza did not marry, but later in life she kept house for her brother Thomas Gelsthorp who continued the family business. Thomas was three times mayor of Louth, chairman of the British School Managers, President of Louth Mechanics Institute, and a prominent member of the Ants & Nats. Eliza died in 1907.