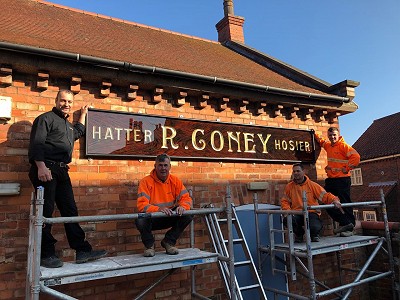 When you go along Broadbank take a moment to glance at the southern wall of the museum beyond the porch, to see the sign “R Coney, Hatter and Hosier”.

This newly-restored sign, almost 4 metres in length and very heavy, was fixed on the wall by Rodden & Cooper. It originally came from Coney’s shop in Eastgate, and had been created by a process known as the “Brilliant Process” which originated in Victorian times to replace the earlier and more expensive carving and gilding process. The Brilliant Signs factory, based in Uxbridge, became very successful, and continued unto the 1970s. Each letter was cut from a thin metal sheet and pressed onto the inner side of the glass to give the illusion of carved letters behind the glass.

Donated to Louth Museum by Brocklebank Reclaims, our Coney sign had previously been on display outside the museum, but rather hidden on the lower wall, and then it went for a face-lift at Eskdale Restoration in Lincoln.

Where was the shop and who was R Coney? It was in Eastgate near the Fish Shambles; today the premises are occupied by Card Factory. The shop was set up by Alford draper Richard Coney (1844-1932), and subsequently run by his son John Richard Coney (1874-1952). In the museum we have some photos of the exterior and interior of Coney’s shop, an invoice, and a few bits of equipment such as rulers and shears. Those were the days when garments were crafted exactly to your measurements rather than being made for the mass-market.