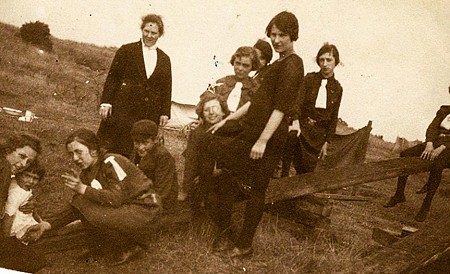 In about 1924 the 1st Louth Girl Guides went to Rimac, where they put up a tent and created see-saws with planks over barrels. Those were the early days of the Girl Guides, an organisation which had been started only in 1909. The lady standing towards the left of the picture was Guide leader Mrs Ellen Smith, wife of Louth shoe dealer Joseph Smith; it is thanks to her future daughter-in-law Mrs Rowena Smith that we have this photo in Louth Museum.

The name Rimac (pronounced rye-mak) isn’t a typical Lincolnshire name, but was given to this coastal area after the sailing ship ‘Rimac’ bound for Hull docks, ran aground here in stormy weather in December 1874. The Rimac was one of many ships transporting guano (bird droppings) from South America to the UK, where it was used as a nitrogenous fertilizer. The ship Rimac had been built in Whitehaven in 1834 and was named after the River Rimac which runs through Lima in Peru.