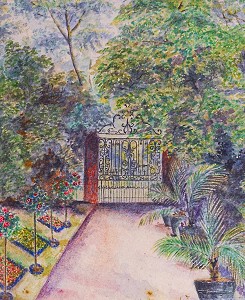 19th Century view of a gate at Thorpe Hall

This small painting is currently on display in Louth Museum in the Special Exhibition of Local Paintings. It is a 19th Century view of a gate at Thorpe Hall, the large house set in 20 acres of grounds on the western side of Louth. The house was built in the 16th Century for John Bolle who together with Sir Walter Raleigh went on an English expedition to Spain, and afterwards Captain John Bolle was knighted for his valiant services at the Siege of Cadiz.

At the time when this picture was painted, the Fytche family lived in Thorpe Hall. First was John Disney Fytche who was the son of Stephen Fytche, Rector of Louth and uncle of Alfred Lord Tennyson. J D Fytche’s son, John Lewis Fytche then lived in the Hall from 1855 to 1885 when he went bankrupt. Later the grounds were laid out by Gertrude Jekyll.

The artist of our painting is unknown, but the reverse of the frame bears the stamp of William Fieldhouse, “Gilder and framemaker, artist colourman and fancy stationer”, whose business was in Mercer Row.

If you haven’t already done so, do come and see this little painting and many more in the exhibition which runs until the end of August. There are lots of unusual quirky ones – don’t miss the opportunity!