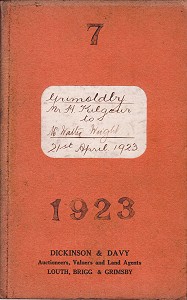 Do you recognise the name “Chrysalis Records”? And did you know that Chris Wright, co-founder of Chrysalis Records and Music in 1968, is from Grimoldby? Chris Wright was born towards the end of World War II. His parents were farmers Walter and Edna Wright, and they lived at Grove Farm, Grimoldby – that’s the farm on the B1200, just opposite the entrance to Manby Airfield. In Louth Museum we have the notebook of estate agents DDM that records the transfer of the farm to Walter Wright when he moved to Grove Farm in 1923.

By all accounts Chris had little interest in farming, and was particularly unenthusiastic about getting out of bed for early morning milking at 5 o’clock. This must have been disappointing for his parents, as Chris was their only son.

Chris had ambitions to become a sports or political journalist, and went to Manchester University to study politics and modern history. The music industry was booming in the 1960s and after graduation, Chris became an agent who could organise entertainment anywhere in the north of England. He moved to London and together with Terry Ellis founded the record label Chrysalis (Chris Wright + Terry Ellis = Chrys-alis), which developed into one of the world’s leading record and music publishing companies, becoming a PLC in 1985. The company was sold to EMI in 1990, but in 2016, Blue Raincoat Music purchased Chrysalis Records Ltd and Chris Wright is now non-executive chairman.

In 1980 Chris Wright became Chairman of the British Phonographic Industry (BPI) and in 1982 he re-launched the British Record Industry Awards as an annual event, the forerunner of the BRITS. He is a former owner of both Queens Park Rangers FC and Wasps Rugby, and he regularly appears in the national press as a commentator on current affairs.