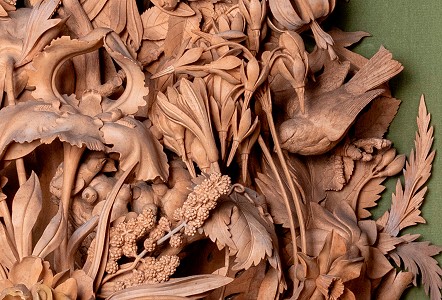 In November 2018 two young men came to the museum and skilfully took photos of some of our sculptures. This was because we had become part of the Art UK Sculpture project, which is creating a record of the UK’s publicly-owned sculptures, making images and information available on the Art UK website.

In Louth Museum we have the nationally-acclaimed collection of wood carvings by Louth sculptor T W Wallis. These are in protective glass cabinets and we amateurs had found that taking decent photos was almost impossible because of reflections from the glass. We now have top quality images of all Wallis’ carvings so we can see the sculptures in superb detail, and appreciate their intricacy. See for example, the small bird approaching its nest of chicks, in Wallis’ carving ‘Trophy of Spring’. Several of Wallis’ carvings depict dead game birds, but I much prefer this carving of live birds!

Born in 1821 in the family of an impoverished cabinetmaker in Hull, Thomas Wilkinson Wallis came to Louth to work for gilder John Brown of Upgate. When John Brown died in 1844, T W Wallis took over his shop and continued to live and work in Louth. ‘Trophy of Spring’ was Wallis’ most intricate carving; it took him 8 months to complete, it was awarded a medal at the Great Exhibition of 1851 in London, and it is considered to surpass the work of celebrity sculptor Grinling Gibbons (1648–1721). ‘Trophy of Spring’, which had been purchased by a US resident was bequeathed to the museum and returned to us from California in 2015.