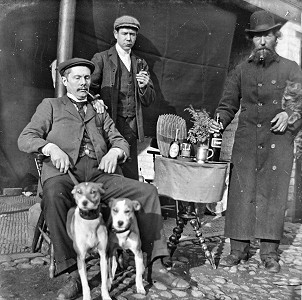 1890's men with dogs and bottles of drink

It is a sobering thought to reflect that in 200 years’ time, in 2219, we will all have been long dead. No-one alive at this future time will remember us. For the vast majority of us nothing we write is likely to have survived. It'll be as if we had never existed. Indeed, time eventually renders us all anonymous.

But, what if a photograph of us still existed? Even if people 200 years hence don’t know our name or who we were, they might wonder what we were thinking when the photograph was taken, what our life was like, what it was like to live in the early 21st Century.

Likewise, when we look at old photographs, we too may connect to the past. It may initiate an emotional response in us, a whimsical reflection in what it was like to live in those times, how they viewed the world, their preoccupations, what their day to day lives were like.

What were they feeling when their photograph was taken? Photographs taken back then will have been very few and far between, so they will have been aware their photographs might attract some attention. Perhaps it is even possible for one or two of them to have speculated that people in the future are viewing them “now” just as the photograph were taken. A moment gone just as the shutter clicks, but yet a moment also captured that might last for hundreds of years.

Without photographs we would, to a large measure, be emotionally shut off from the past. Viewing old photographs, that frozen moment in time, allows us that emotional identification.

The photo shows men with dogs and bottles of drink, probably in the Tetney area in the 1890s. We don’t know who they were.