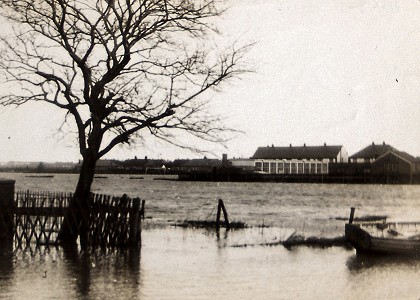 We are thinking a lot about flooding at the moment as homes and farmland remain flooded in the East Midlands, and as we prepare for the centenary of the 1920 Louth Flood.

The museum has recently been given newspapers relating to the 1953 North Sea flood when a high spring tide together with a severe windstorm led to a water level in some locations of more than 5.6 metres above mean sea level. The Netherlands was worst affected country, recording 1,836 deaths and widespread property damage. In England and Scotland 326 people were killed. I had known that there were great problems in Mablethorpe and Sutton-on-Sea, but I had not realised that four elderly residents died in Saltfleet: Herbert Horton, Emma Clayton, Annie Millward and John Frost.

The photo shows the school at Mablethorpe, surrounded by water. Many people from the coastal areas were evacuated to Louth where they were housed in schools and other public buildings, and some lodged in the houses of Louth families. Also cattle from coastal farms were temporarily stalled at Louth Cattle Market.