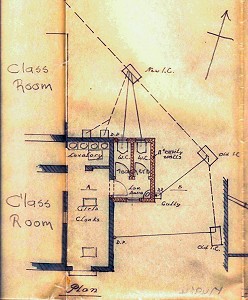 The diversity of items we have in Louth Museum is amazing. My attention is caught by a plan of the new toilets built for teachers in Eastfield School in 1930, which was one of many items given to us by the late David Robinson. We don’t have any context to this plan which is hand drawn on tracing paper, but it must be the school that was at the corner of Eastfield Road and Riverhead Road.

Something else that is wonderful is the personal knowledge of people in our community. When I asked Stuart Sizer about this school he replied, “Eastfield Road School initially known as the Holy Trinity Parochial School was built in 1865. It was enlarged in 1870 to house 380 children. In 1922 its name changed to Eastfield Road School. As the population grew after the War 2 there was insufficient room to accommodate all the children, and the old Trinity Institute in Riverhead Road was used for the 5-year-old children. They then went to the "Big School" at the junction of Eastgate and Eastfield Road. The St Bernard's housing estate had just been started and it became obvious that the rising numbers were going to outgrow the school. As an interim measure the older juniors were moved into the old Fire Station Nissen Huts situated at the rear of Eastfield House and backing onto Park Avenue.

The buildings were cold in the winter and had holes in the walls at ground level. It was quite common to see the odd rat poking its nose through these holes. (I can vouch for that.) When the King died we had to stand in silence for two minutes as a mark of respect. My friend and I got a clip round the ear for moving when we saw a rat come into the classroom. The teacher wouldn't believe us.

The school was for children up to the statutory school leaving age until Monks’ Dyke opened, when the 11-year-old children transferred there.”