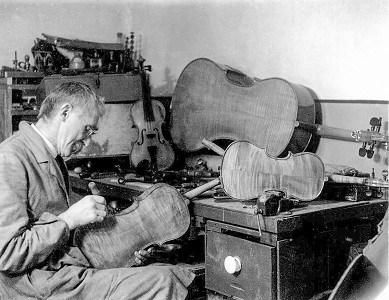 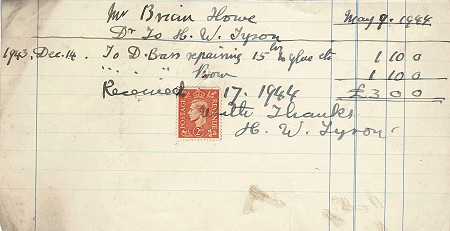 In working through our backlog of items in the museum this week, we came across a 1944 invoice from H W Tyson for the repair of a double bass belonging to Brian Howe. We already have several other items in the museum collection that relate to Tyson: a violin he made in 1923, a photo of him making stringed instruments (shown here), another invoice dated 1930, a photo of him with the Louth Choir, and copies of newspaper reports from 1937.

Herbert William Tyson was an extraordinarily talented member of the Louth community. Born in Welton-le-Wold in 1876, the son of an agricultural labourer, he attended Kidgate Primary School. By the age of 14 he too was employed on a farm, but moved on to work for a wheelwright in Washingborough. At the beginning of the 20th century he returned to Louth, married, and lived in Newmarket, where he had his own business as wheelwright and joiner. We know exactly where this was because we have a photo showing the location which is now Ashtons Carpet Warehouse.

Herbert was a carpenter and self-taught musician who developed his carpentry skills to make stringed instruments. His musical abilities were widely known in Louth, and then in October 1937 he became nationally recognised when the BBC made the very first broadcast of a concert performed in Louth. This concert in the Town Hall was also exceptional in that every one of the instruments of the orchestra, with the exception of the piano, had been made by H W Tyson, and the conductor of the orchestra was H W Tyson.

In the 1939 pre-war register H W Tyson’s occupation was “Master joiner, undertaker, violin and cello maker”. He died in Louth in 1960 at the age of 83. His obituary described him as “Well-known in musical circles both as a player and maker of musical instruments.”

Addendum, Email from Ian Tyson to Louth Museum, June 2020: H W Tyson was my granddad.  I have the original photo of the orchestra for which he made all the instruments, and as a child we used to play in the wood yard. I also have one of his violins, and well remember the front room being full of violins and cellos when he and my grandma moved to 78 Newmarket (much to my grandma’s annoyance).  He also made pews and the lectern in the church I think.