Coach from Elkington Hall is now in Canada 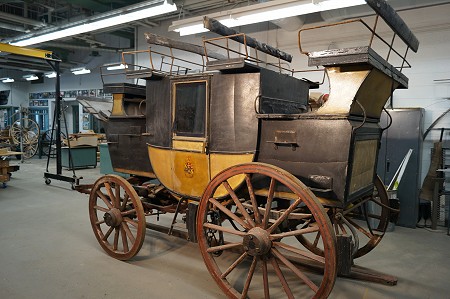 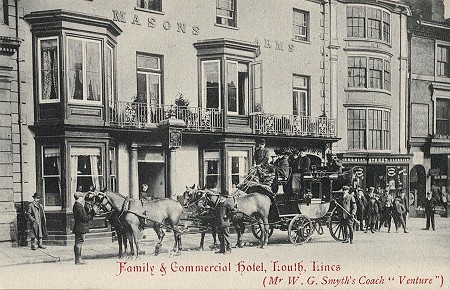 Just before Christmas we received an email from the Remington Carriage Museum in Alberta Canada saying they are restoring a Shanks Road Coach that had belonged to W G Smyth of Elkington, and asking if we could provide any relevant information. This query has generated a lot of interest, and you may have seen an article by Peter Chapman in the Grimsby Telegraph.

William Grenville Smyth was born in 1857 in South Elkington Hall. The Hall is now demolished, but the stable buildings are still there. After he retired as a Captain in the Lincolnshire Regiment, W G Smyth and his American-born wife lived in fine style in Elkington. Smyth was a sportsman who enjoyed big game hunting in Africa and America, he claimed to have ridden with every pack of fox hounds in the country, he cycled from Land’s End to John O’Groats in five days and he regularly skated on Louth’s skating rink.

Coaching was one of his passionate hobbies; even though he had a motor car he preferred to travel in one of his horse-drawn coaches. It is said that he was the only man who could drive a four-in-hand at a trot into the yard of the Mason’s Arms.

Mrs Smyth did not share these hobbies, and one can imagine that she felt neglected, living a life of relative seclusion in Elkington. The couple divorced which created nationwide attention, W G Smyth moved out of Elkington Hall, and the Shanks coach was bought by Sir Geoffrey Harmsworth of Thorpe Hall. It spent several years in the Museum of Lincolnshire Life, before it went to Canada in 1985 as part of a bequest from Sir Geoffrey.

Jeremy Masterson who is restoring the coach in Alberta commented that the old coach is in surprisingly good condition, although the front wheels need new felloes and new spokes. The current owner of the coach is having it restored so she can hitch up her finest teams, load it up with friends and family, and take to the road.

Additional comment from Jeremy Masterson, August 2020:  Based on patent information found on a door latch, I can now date the origin of the coach as being after 1878.  I have also found that the coach body was originally royal blue where it is now yellow.