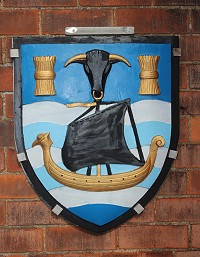 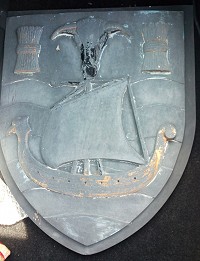 On the wall outside the museum there is now a colourful shield, which many people will recognise used to be at Cordeaux School.  It is in fact the coat of arms of Lindsey County Council, which was abolished as an administrative entity in 1974 under the national changes in local government.  The shield has been repainted in its original colours by museum volunteer June Seymour, and was fastened to the wall by Andy Cooper.

Cordeaux School first opened in September 1956, when it was known as High Holme Road Secondary School.  In 2017, when it became part of the Tollbar Multi Academy Trust, the branding changed and the old shield was no longer wanted.  Now the school is officially known as ‘Louth Academy Lower Campus’ and caters for children in Years 7 and 8 (age 11 to 13 years).

Cordeaux School was named after Captain Edward Cawdron Cordeaux who was a distinguished Royal Navy officer, surgeon and later High Sheriff of Lincolnshire.