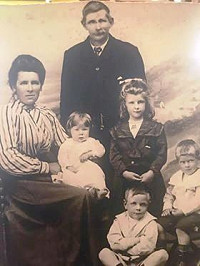 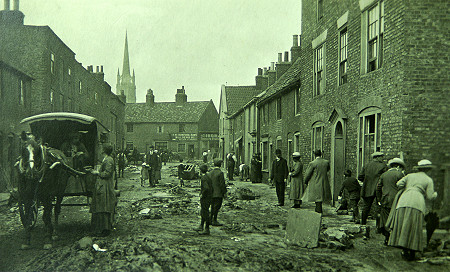 James Street after the flood

We had been planning to welcome Mrs Betty Jamieson to Louth Museum to the opening of our Centenary Flood Exhibition at the beginning of April.  Betty, who lives in Lancashire and is now elderly, has a direct connection with Louth as her family was torn apart when both her grandmother and her aunt perished in the 1920 Flood.

The Bromfield family lived at Ings Farm in South Somercotes. Samuel Bromfield had died during the epidemic of Spanish Flu in 1918, leaving his wife Margaret and elderly father George struggling to run the farm and look after the five children.  The eldest child was 14-year-old Clara and the youngest, Mary, was four years old.

The photo, taken in 1911 several years before the flood, shows Margaret and Samuel Bromfield with Florence, Clara, Henry and Sam.

In 1920 Clara was working in domestic service in Louth Park, and Margaret arranged to meet up with her on Saturday 29 May, and go shopping in Louth.  So Margaret cycled from South Somercotes meeting Clara on the way.  It was when they were on their return journey, cycling homewards along James Street, that the flood suddenly burst through to devastate the town, and both were swept away to their deaths.

The loss of the mother meant that the family were divided; little Mary was sent to her aunt in Stockport, the two boys went to distant relatives in Canada, and nine-year-old Florence, who was to become Betty’s mother, lived with a family in Mablethorpe.

Many other stories about families affected by the 1920 Flood can be seen when the museum eventually re-opens after our current ‘once-in-a-lifetime tragic event’ is over.