Fire Station in 1984, in Broadbank 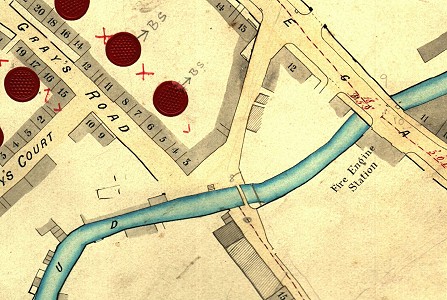 This photo shows a two-storey brick building, and written on the back of the photo is “1984, Louth Fire Station in Broadbank”.  The building appears somewhat neglected, and it is probable that by this time the fire service had already moved to the modern fire station on Eastfield Road. This old building was demolished, and the site in Broadbank is now the car park next to Spout Yard.

The town’s first fire engine station was (according to Dr Green) built in 1821, and it would have housed a small manual engine.  We know exactly where it was, because it is shown on old maps on the western side of road, just south of the river.  For this reason, the road which had previously been called ‘Lowgate’ became known as ‘Enginegate’.  It is now ‘Broadbank’.

A two-storey school for girls and infants was built alongside the river, just behind the fire station, and opened in 1834.  This was the National School for Girls and Infants, run in line with and funded by the Church of England; there was also a National School for Boys in Westgate.  The Girls and Infants School started with two teachers, but funds from the church were constrained and by the 1850s there was only one teacher for whole school.  Even though the older pupils taught groups of younger children, classes were large, discipline was harsh, and attendance poor.  The school is clearly visible on William Brown’s 1847 panorama, and we can see that it is the same building as in the 1984 photo when it had become known as the fire station.

The first fire station must have been a rather insubstantial building, and because it was located close to the river it was completely demolished by the Louth Flood in 1920, and the town’s three fire engines were destroyed.  In the museum collection we have a 1920 photo taken after the flood, showing the debris of the fire station with the large, more robust, school building behind.  The National School appeared to function for a few years after the 1920 flood, but at some stage the Fire Service took over the school building – they needed to create the two large doorways that we can see on the photo - and the old school building became known as the fire station.

I am grateful to Dr Richard Gurnham for his help in writing this post.