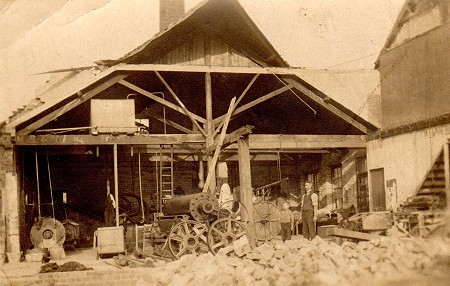 Postcard showing the laundry after the flood 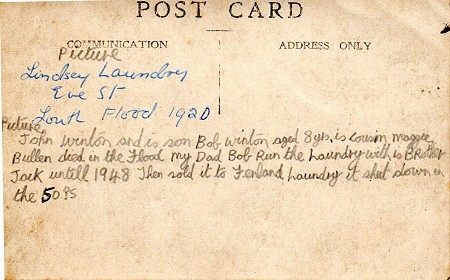 Back of postcard, with Bobby's notes

In the Louth Flood of 1920, a total of 23 people were drowned and hundreds of others had to live in tents because their houses had been destroyed.  This is a personal account of the Louth Flood, written many years after the flood by Bobby Winton (b 1912, d 1993).  His family ran the Lindsey Steam Laundry in Eve Street, Louth.

When I was eight, on Saturday May 29th 1920, came the Louth Flood.  Much has been written of it.  I will just relate the small part in which I was involved.  I remember the afternoon, about 2 o’clock it rained.  Nothing more than I’ve seen it rain before, in fact I’ve seen much harder downpours.  Billy and I were in the laundry looking at the rain from one of the side windows overlooking the laundry yard.  I remember saying to Billy, “If the yard filled up with water up to the top of the protruding doorway of your house, we could use one of these trolleys as a boat.”  Don’t know what Billy replied but that is what happened.

The rain stopped by 3 o’clock.  Dad took his rod, which he always kept extended and hooked ready - just needed dad’s favourite bait, a worm.  Together we went up the laundry garden to where, by an apple tree on a bankside, Dad dangled his worm, hooked a fish and as he lifted it some feet from the water, to our disgust it dropped off.  There were two ducks in a small chicken-wire run nearby.  Gran had rescued one, one Wednesday market day when it fell off a cart into the road.  Dad bought another one to keep it company.

We both went into the laundry then, and someone gave the alarm that something strange was happening to the usually placid Lud.  Soon we were all viewing the river from windows that overlooked the river, Dad, I and Uncle Bill - I cannot remember any others.  Soon the river flooded over on the lower opposite side, very abnormal.  A man I remember had some baby chicks there, and waded down, and was gathering them in a large Macintosh hat.  The next thing I remember was a wooden tumbril coming down past the window with a grunting pig running round in its strange boat.  What struck me, was I frightened?  I don’t think so, just excited and I wanted to tell Mum.  Without a word I stepped down from the window and decided to go home.  The laundry floor was dry.  At the end of the boiler house I opened the door, and as it was four or five inches lower than the main building, got the shock of splashing into water up to my ankles.  I went through it and paddled into the yard and then I ran.  Up the dirt road into Eve Street, into Northgate and soon I was home.

“Mum! Mum!” I shouted as I entered the house by the back way.  “There’s a flood, Dad will be drowned!”  Neither Mum nor Gran believed me, but at last Mum decided we’d better go and investigate.  At the passage end into Northgate, this led to Dawsons the butchers and to our and Cawkwells’ back way, Mum and I saw the flood alright.  It had reached the Kings Arms pub fifty yards away, and kids were paddling amongst floating wood etc.  Then we also knew that the laundry which was much lower must be in a perilous state.  I can’t now recollect my thoughts.  I know I stayed in the house, when I could have gone up to the Pack Horse yard at the top of Eve Street and then been able to see the state of the flood there.  But for some reason I didn’t and neither did Mum.

At the laundry, after my departure, Dad and Bill soon realised that something serious was about to happen.  Not of course the calamity that did happen.  They jolly soon left their view point at the window for now the full fury of the cloudburst up on the Wolds was about to happen.  They went across the flooded laundry floor, Bill for home and Dad up the steps above the packing and sorting office.  My young cousin Maggie worked there, 15 years old, and an older girl Lizzie Casswell.  Now Father and Uncle Bill knew they were there, one Bill’s own youngest daughter.  Why, I say to myself, why did they not shout to them, a few yards away, to come upstairs?  I sincerely don’t know, for no sooner had they got to the upper storey, than with an almighty crash, the end of wall of the laundry collapsed.  Fortunately for Dad he went the right way, for they could have gone into that long upper room instead of the small rooms that had once been the cottage bedrooms.

At first, in the laundry office below, the floor must have been gradually covered in that first gentle rise of the flood, so according to Lizzie Casswell they had both climbed onto a long counter and sat there to keep their feet dry.  Then the sudden fury of the flood engulfed the whole building.  Three feet away from the counter was a large window, next to it a door, and next door was Bill’s house with it’s porch type door.  The flash flood hurled the counter towards the window, which fortunately for one girl was shattered into a thousand pieces, and they were hurled after it.  A rhone downspout was on the side wall by the window; by a miracle Lizzie grabbed it and hung on.  She felt Maggie clutch at her skirt and was gone into the 8-10 ft of flood water.  Lizzie shouted and Bill came out of his top windows, stood on top of the porch and pulled her up to safety.  Maggie drowned in the flood, and in a way it was fortunate she did not surface so her parents did not see her drowned.  Her body was found next morning in a corner of the laundry yard, lying in a pile of coke, when the flood had quickly receded by way of the flat marsh to the sea.

Dad got home about seven.  Row boats had been fetched hurriedly from Mablethorpe and they rescued them from the laundry.  Dad’s first words to my Mother when he came in were “Is Bobby here?”  Mum said “yes” and Father said “Thank God”.  Mother then asked “Are all safe?” and was told all but Maggie.  I think young Billy stayed the night with us.  Bill and family went to friends.

I see the subsequent days as mud, mud everywhere.  The River Lud ran full for months as it drained away.  A real live diver in full gear worked beneath Eve Street bridge trying to clear parts of trees etc.  They cut down our big elm at the bridge side.  The flood couldn’t topple it.  There was only half a laundry left and Dad managed after a month or two to work in that half by hanging a tarpaulin to keep out what wind he could till the laundry could be built again.  The flood fund paid for this, Mayor Ald Lacey.  It transpired years after there was still money in that flood fund.  Uncle Nat from Guiseley came by every weekend to help.