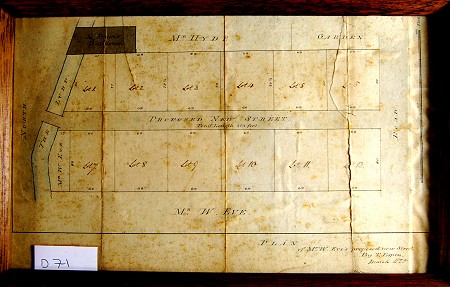 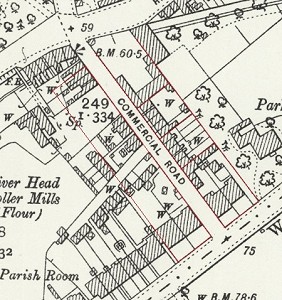 One of the items in the museum store is a hand-drawn plan showing 12 plots of land on both sides of a road that leads to the River Lud.  Its legend says ‘Plan of Mr W Eve’s new street, by T Espin, March 1820.’  William Eve was a Louth businessman, whose name is still associated with the shop Eve & Ranshaw.  Thomas Espin was a schoolmaster and architect.

Although the road is not named on the plan, our museum catalogue had it listed as Eve Street.  But we began to question this.  The plan is dated 1820 and we know this is correct because the Stamford Mercury newspaper of 31 March 1820 gives details of these 12 plots to be sold by William Eve.  Eve Street had been created before 1800 and already had cottages by 1820; the length of the new road on the plan was 414 feet, considerably longer than Eve Street; and why wasn’t James Street branching off to the right on the 1820 plan?  We deduced that this is a plan not of Eve Street but of Commercial Road.

Commercial Road runs northwards from Eastgate down to Riverhead Road.  Eastgate is a long-established road, but Riverhead Road was created in the late 18th century to link the terminus of the canal with the town centre.  The canal had been completed in 1770, and a new industrial suburb was evolving around here.  It is interesting to follow the developments along Commercial Road by looking at maps and newspaper reports.  The early censuses and the rate books are of little help as they merely record the location as “Riverhead” so it is not possible to see who lived where.

The earliest appearance of the name “Commercial Road” is in an 1826 advertisement in the Stamford Mercury Newspaper, which (removing extraneous details) tells of the proposed sale of property belonging to William Dunn, “a brick granary with four floors, fronting the public highway [Riverhead Road] 75 x 33 feet with a yard, having a frontage of 83 feet on Riverhead Road towards the North, and frontage of 161 feet on Commercial Road to the west; with a newly-erected drying-kiln and commodious sheds enclosing the yard on the south and partly on the west.”  Dunn’s granary must be that shown in the top-left of the 1820 plan (or possibly a replacement building on the same site), and the yard, drying-kiln and sheds are the plots that were numbered 1 and 2.  The reason for the sale was that William Dunn had been declared bankrupt.  In the next two decades these premises seemed to change hands several times, and the business was continued by various tenants.  This corner of Commercial Road was and still is an industrial rather than residential site.

The plots adjoining Dunn’s yard on the eastern side of Commercial Road, those numbered 3 and 4, appear to have been developed separately for housing, as the boundaries of each plot remained intact.  The terraced cottages on Plot 3 have even numbers 12-20 and are set back a little from the street, while those on Plot 4, numbered 2-10, were built directly on the street.  An 1829 advertisement for the sale of “A piece of garden, very desirably situated on the east side of Commercial Road in Louth” most likely refers to the sale of one of these two plots.

At the southern end of the eastern side of the road (Plots 5 and 6) two large houses were built, each with a frontage on Eastgate, and with premises stretching back almost 140 feet along Commercial Road, the length of the two 1820 plots.

Turning now to the western side of Commercial Road, it appears that most of these plots were not sold by William Eve in 1820; in 1839 Eve’s executors again put this area up for sale, along with further land fronting Eastgate. This explains why the plot boundaries shown on the 1820 plan have little concurrence with the subsequent development.

As with the eastern side of Commercial Road, on the western side large houses were built to front onto Eastgate.  Leading west from Commercial Road a private carriage road - it is still there - serviced the rear entrances to the whole row of houses opposite Holy Trinity Church, eventually eight houses.

By 1839 there had been two developments on the western side of Commercial Road; the advertisement describes a house, probably in plots 10 and 11; and next to the River Lud there was a house with garden, butcher’s shop, slaughter house and stables.  These were properties belonging to William Eve, but rented out.  They are no longer there.

One notable difference between 1820 and today is that the river is no longer visible at the northern end of the road.  The watercourse is now enclosed in a culvert, and to the west there is a row of houses directly above the river.  In the 1826 newspaper report William Dunn’s yard is described as having a frontage on Riverhead Road rather than a frontage on the River Lud, which suggests that the river had been culverted here before 1826.