Attack at Kenwick Toll Bar in 1844 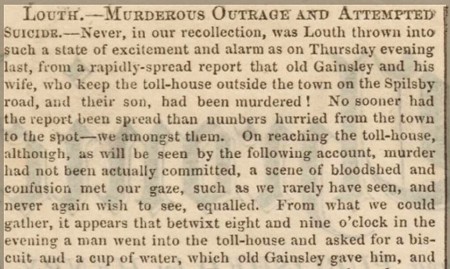 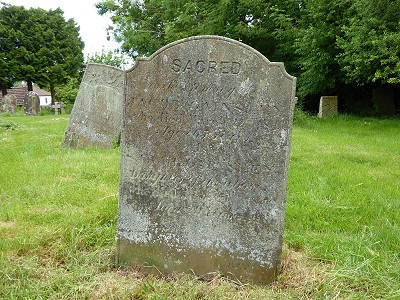 A query from Australia prompted me to examine an incident at Kenwick Toll Bar that took place on the evening of Thursday 30 May 1844.  News reached Louth that the toll-house keeper Jacob Gainsley and his wife had been murdered.  This was an exaggeration, but an alarming incident had taken place.

The road south of Louth, now the A16, was a toll road, and on the crest of the hill just north of the junction with Poverty Lane which leads to Tathwell, travellers had to stop at a gate across the road, and pay the toll keeper.

The attack was initiated by 37-year-old William Markham.  Formerly a baker’s apprentice in Louth, he had served 14 years in the Royal Artillery before discharge with a pension, and then he had been employed as a keeper of Lincoln Lunatic Asylum.

The previous Friday, William had been fined at Horncastle for biting off a man’s ear, a charge he denied.  Over the next few days he walked towards Louth, via Scamblesby, and came to the house of Jacob Gainsley, the keeper of Kenwick Toll Bar.  There he bought a bottle of ginger beer and a biscuit.  William held a grudge against Jacob who had previously alerted the police to the fact that William’s brother had been riding on the shafts of a wagon, an illegal practice.  In Kenwick Toll House William picked up and fired one of Jacob’s pistols into the air.  William was overpowered by Jacob, his wife Ann and son Hur.  In the struggle William was wounded by a dagger, and ran from the toll house via Legbourne to Bilsby, where he arrived about midnight at the house of his friend Mrs Desforges.  To account for his bloodied appearance, he told her that he had been attacked by some brick-makers.

When the police arrived in Bilsby to apprehend William he attempted suicide by cutting his throat with a razor.  After being stitched up by the local doctor, he was charged with having shot at Jacob and Hur Gainsley, with intent to kill and murder.  The defence was that at the time of the offence, William was not in a right state of mind.  The jury at Lincoln Assizes returned a verdict of “Guilty”, and he was sentenced to transportation for life.

My correspondent in Australia, Laurie Seivers, wrote, “William Markham is a great great grandfather of mine.  Once he arrived in Van Diemen's Land as a convict (Australia as a country did not exist at this time - the land mass was a number of English colonies until Federation in 1901 which is when Australia was born) he served time at the notorious Port Arthur penal colony and eventually in 1855 was granted a ticket of leave.  He enrolled in the Southern Tasmanian Volunteer Artillery and remained a member until his death in 1882, when all ships in the Harbour flew their flags at half-mast out of respect.”

A newspaper in Australia recorded his death, “at the advanced age of 74 years, leaving a wife and family of seven to mourn the loss of a loving husband and kind father”.  Quite a turnaround, given the circumstances of his arrival in Australia!

Jacob Gainsley, the toll-house keeper, on the other hand, did not live long after the attack in 1844.  He died the following year at the age of 65, and was buried in St Vedast’s Church in Tathwell.