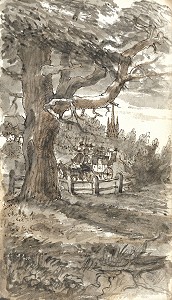 James William Wilson was a Louth solicitor, and also a talented amateur artist.  In 1840 he published a book, “Sketches of Louth” containing twelve engraved plates.

Recently a family from Lymington discovered a sketchbook of James William Wilson in their family heirlooms, and Tom Barker kindly sent us detailed scans of the sketches, which portray mid-19th century views of people and places.  Here we highlight two sketches; if you would like to see all fifteen, do contact us.

The first sketch is “John Jackson. An old bookseller in Louth, one of the Commissioners of the Louth Navigation.  A sketch taken by me as Clerk to the Commissioners on the annual view taken of the canal.  He died 24th March 1849."

The Jackson family had a printing and bookselling business in Louth Market Place; the building is now the Oxfam shop.

Alfred Tennyson and his brothers were local boys who wrote poetry, and John Jackson was the benevolent gentleman who recognised their talent and supported them.  In April 1826 Jacksons published “Poems by Two Brothers” by Charles and Alfred Tennyson; and so launched the career of one of the most famous British poets, Alfred, Lord Tennyson.

The second sketch is “Julian Bower, Louth, in the old coaching days.  The mail leaving for London.”

There has been some controversy in recent years over the exact location of Julian Bower.  This picture shows Julian Bower on the eastern side of the London Road.  It was at the highest point of the hill, now the northern end of the cemetery.

Here there may have been a medieval turf maze, and according to Richard Gurnham, Julian Bower was probably the site of the 10th Century meeting place of Loutheske Wapentake, the local administrative body.  In the 1536 Lincolnshire Rising against the dissolution of the monasteries, the rebels gathered at Julian Bower before they marched to Lincoln.  In the sixteenth century it was referred to as ‘Gelyn Bower’ meaning the Girls’ Bower.