Bitome or William Decker, an African boy in Louth 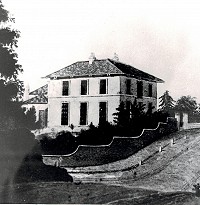 The registers of St James’ Church show that on 15 March 1843 William Decker, a native of Africa, about 15 years of age was baptised, and then a few days later he was buried here.

It seems likely that William was baptised when it became apparent that he was so ill that he would not recover.  Baptism meant that he could be buried in St Mary's Churchyard, and there was the belief that only those who had been baptised would go to Heaven when they died.

We can piece together William’s life story because questions were asked about the circumstances leading to his death, and reports were published in both the Lincolnshire Chronicle and the Stamford Mercury newspapers dated 24 March 1843.

William had been brought to Louth by Henry Edward Cropper, an international merchant.  Henry appears to have been resident in Sierra Leone for a few years, and then in 1845 he died in China.  Henry’s father was Robert Cropper, the Surveyor of Turnpikes, and the family home was Louth’s South Street.  The house is not named in the censuses and rate books, but it was almost certainly the impressive newly-built house, now known as ‘The Beeches’.

The story, as told by Henry Edward Cropper, was that in West Africa ten-year-old Bitome (later known as William) had been taken prisoner, along with a great many other people.  They were marched from the interior to the coast, where they were sold to Spanish slave dealers and put on a ship bound for the Americas.  But before they had got clear of the West African coast, the boat was seized by the British Royal Navy, taken to Sierra Leone and the prisoners liberated.  The adults were each given a plot of ground and the implements to cultivate it.  Young Bitome was indentured to a native schoolmaster named William Decker, from whom he took his name.  But the boy was ill-treated, ran away, and lived with Henry Edward Cropper for about two years.  Henry described him as a fine, sharp, active and intelligent lad.  When Henry returned to England, William came too and lived with the Cropper household in South Street, where he worked as a servant.  As the cold weather set in William became progressively unwell; he became emaciated and did not appear to know what he did.  He died in March 1843.

An inquest was held in the Brown Cow public house, where Dr Trought reported that the post-mortem examination showed that William had died from ‘tabes mesenterica’, a wasting disease of childhood characterised by inflammation of the lymph glands.  This would probably have been a form of tuberculosis.  But in 1843 the cause was not known; it was several decades later that German physician Robert Koch developed the concept of infectious disease and identified the bacteria Mycobacterium tuberculosis.