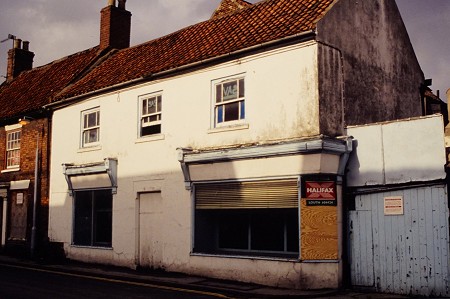 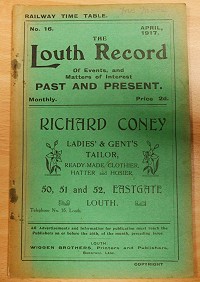 This photo of an unoccupied building was taken in 1992 by Harold Jackson.   Harold’s daughter Chris kindly lent us her father’s large collection of transparencies, and they have been copied by a team of museum volunteers led by Derek Smith.  The digitisation process is now complete, and the photos are being catalogued and put onto the museum database.  They are a wonderful photographic record of Louth in the last three decades of the 20th Century.

You may recognise the building, which is now the Urban Studio hair salon at 25 Northgate, next to the Post Office.  Harold had labelled this photo, “Former premises of Wiggen Printer in Northgate”.  I was delighted to see this inscription, as we have 86 documents in the museum printed by Wiggen, and I had not known the exact location of the Wiggen printing works.  Recently I have also located a photo of the building when it was the thriving printing shop.

The dates of our Wiggen documents are from 1905 to 1968.  The censuses show that Thomas Edward Wiggen (born 1870) and his wife Frances moved from Warwick to Louth in about 1897.    Initially Thomas worked for another printer in Louth, but by 1905 documents were being printed by ‘Wiggen Brothers, Steam Press, Burnthill Lane’.  It appears that T E Wiggen was in partnership first with his brother John, and then with William Lacey.

In December 1918, T E Wiggen’s partnership with Lacey was dissolved, and he moved to ‘The Printeries, Northgate’.  Thomas and Frances’ elder son Thomas William Wiggen had been killed in the war, but younger son Walter Walwin Wiggen (born 1899) officially entered the business which became T E Wiggen & Son.  T E Wiggen died in 1963 at the age of 93.

Geoff Allinson told me that Allinson & Wilcox bought the business T E Wiggen & Son in 1972.  Production moved to Allinson’s Queen Street site, although for a while large posters were still produced in Northgate, the print works were used as a warehouse for paper, and the shop was rented for various uses, one being a pet shop. In 1987 the Northgate site was sold to a consortium and developed into housing and the hairdressers.

The documents printed by Wiggen include a range of local directories, guide books, programmes for concerts, school magazines, and church magazines.  Illustrated here is an issue of Louth Record of Events; these were published monthly in 1916 and 1917.

I still don’t know which building in Burnthill Lane was the earlier Wiggen printing works.  If you know, please tell me!