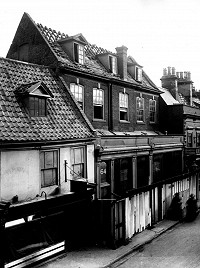 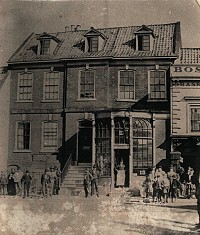 In working our way through items given to the museum by David Robinson, we came across this photo that I did not recognise, but Andy Cooper identified the central building as being on the southern side of Eastgate, just east of the Market Place.  It is now Barclays Bank.  The small building on the left was The Shades Tavern.  The building on the extreme right, with McConnell’s tobacconist shop, is still recognisable today.

In some parts of Eastgate the buildings and shop fronts have received a lot of interest, but this particular area seems to have dodged the attention of local historians.  The first photo was taken just before the building was demolished; we know this because a similar view with identical boarding shows the site after demolition.

The second photo shown here shows the same building, but several decades earlier.  At this time the house had central entrance steps that are also shown on the Sewer Plan of the 1870s.

From rate books, censuses and directories we find that the large house in the centre was, from at least 1823 to 1861, the home of Thomas Overton, a wealthy wine and coal merchant.  He died in 1867 at the age of 93.  In the bow window of the older photo is a sign saying “Kew”, as this part of the building was the shop and residence of hairdresser and musician, William Kew.  On the extreme right is the shop of basket-maker James Boswell.  This photo must have been taken between 1861 and 1881.

After Thomas Overton, the occupants of the large house were physician Dr Palemon Best, his wife and children.  The family had come to Louth from St Ives in Cornwall in about 1867.  The Bests lived here in 1868, 1871 and 1881, and then they moved to Upgate.  In 1885 it was reported in the newspaper that the house was converted into two shops.

In 1891 the premises had been taken over by the Stamford, Spalding and Boston Banking Company.  Initially this office was merely an agency, operating under the Alford branch of the bank.  But it soon became an independent branch with the management continuing in the hands of Mr Edward Ashton.  A comment posted on the internet in 2011 by Bruce Gordon reads, “My great grandfather Edward Ashton gave up farming and accepted a position with the Stamford, Spalding and Boston Bank.  They lived above the bank.  My grandfather and a younger brother originally had a room at the front across from a market until their puppet shows on the blinds at night were drawn to the attention of their parents.  The SS&B bank was bought out by their London partners, Barclays early in the 1900s.”

In August 1911 it was announced that the Stamford, Spalding and Boston Bank was to become part of Barclays Bank, and it must have been after this that the building was boarded up and rebuilt.

The Shades Tavern closed in 1908.  It had also been known as “The Boards” and the “Old Dram Shop”. “Shades” and “Boards” are both believed to be references to windmill sails.