Building and Conserving a Museum Collection 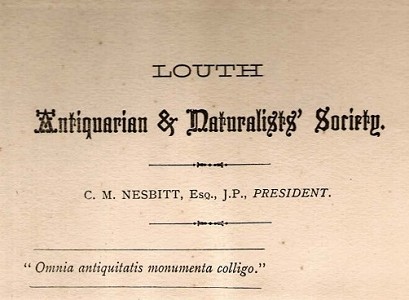 Louth Museum in Broadbank, before extension

The teenage boys who began our Society in 1884 were collectors.   Collecting can become obsessive and collections take up space.  They are, too, more fun if shared with others.   Thanks to the generosity of bank manager Charles Michell Nesbitt space was rented in New Street and the public were admitted on Monday evenings.  However, these premises were soon considered inadequate both with regard to the satisfactory display and safety of the exhibits.

So in 1895 a flyer was produced to request financial contributions for the maintenance of the temporary museum in New Street, and to muster support for the idea of a purpose-built museum.   Over a period of twelve years small donations were collected until the Pahud Trustees’ offer of £250 secured the scheme.   This was bolstered by the generosity of the Patron, Revd Canon A S Wilde who gave £100 from a celebratory collection for his silver jubilee in office at St James’s church.   The constituency MP Sir Robert W Perks Bart gave a further £100.

Louth Corporation was prevailed upon to give the site in Broadbank, and Society member, architect John J Cresswell, drew up plans for a quadrangular building with a small central courtyard.   Sadly funding proved inadequate for this so a less ambitious scheme was adopted leaving land to the north to be occupied when funds allowed – 95 years later!

On Tuesday 18 October 1910, Canon Wilde opened the new museum building in the presence of many notable local people and special guest Professor W W Watts, President of the Geological Society.   The aspirations that were aired on that day remain those of us who continue to run the Museum for the people of Louth and visitors to the town.