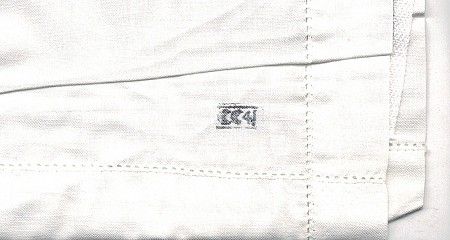 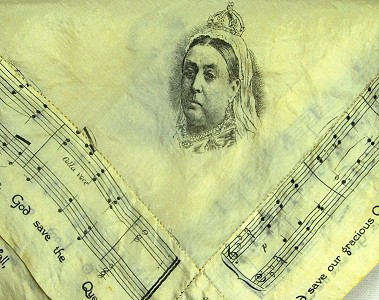 The museum has been given two new gents white handkerchiefs with the utility mark.

The CC41 utility mark was a British Board of Trade requirement that appeared on utility clothing and other goods during and after World War II, from 1941 until 1952.   CC41 meant "Controlled Commodity", and showed that the item met the government's austerity regulations, and was tax-free.

White handkerchiefs may seem very ordinary items, but we decided to accept these two into the collection because young people today use paper tissues, and in a few decades cotton or linen handkerchiefs will become historical items.

A handkerchief, also called a hankie, is typically a hemmed square of thin fabric.  When I was a child it was obligatory to have a hankie in my pocket, and when necessary use it to blow my nose.  Nowadays paper tissues have taken over this role, and fabric handkerchiefs are primarily a decorative accessory.

Where does the word handkerchief come from?  “Kerchief” is from the Anglo-French “coverchef” meaning “to cover the head.”  In the 15th century, people began to carry kerchiefs in their pockets to wipe their forehead or their nose. To distinguish this kind of kerchief from the one used to cover the head, the word "hand" was added to "kerchief".  In Shakespeare's play, Othello, written in 1603, a handkerchief was given as a love token to Desdemona.

According to the Victoria & Albert Museum, the use of handkerchiefs became increasingly widespread in the 18th century because of the growing popularity of snuff-taking.  Having inhaled a pinch of snuff, a handkerchief was used for sneezing into and wiping the face and hands. The brown residue would have appeared unsightly on handkerchiefs with paler designs and so there was a growing market for more practical designs that would help to disguise these stains.

The production of souvenir handkerchiefs can be traced to the 17th century, with designs including depictions of victorious battles, royal events, performers, maps and unusual events.  In Louth Museum collection we have handkerchiefs produced to commemorate the jubilees of Queen Victoria in 1887 and 1897, and her death in 1901.