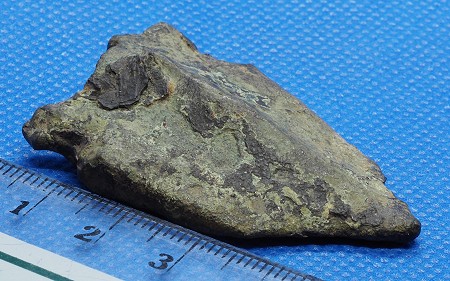 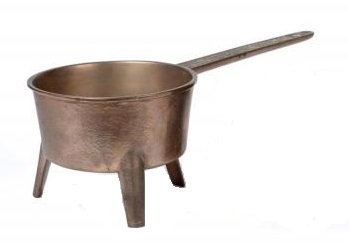 A cooking pot with legs

This small item, which had been found while field-walking, was bequeathed to Louth Museum by Mrs Skipworth of Louth.  Initially we thought it might be a fragment of the blade from a Bronze Age spear or the finial of Victorian railings.  But when we showed to it Finds Liaison Officer Lisa Brundle she identified it as a medieval cast copper-alloy pot leg.

In their article ‘Cast copper-alloy cooking vessels’, Butler, Green and Payne wrote that from about AD 1100, cast copper-alloy vessels were commonly used for cooking, with the vessel sitting among the embers or suspended over the fire. Many medieval or post-medieval households would have had at least one metal cooking vessel. The more wealthy members of society would have been able to afford more than one pot in more than one size, but the quality of the pots themselves did not vary greatly. Because they were valuable, cooking pots were often mentioned in wills and household inventories, and their owners generally took good care of them, repairing holes in the body or replacing broken legs. These vessels gradually passed out of use between 1700 and 1850, superseded by cast-iron pots and by saucepans designed for use on kitchen ranges.