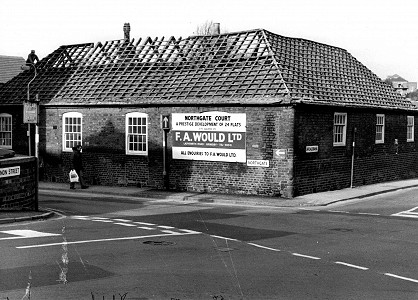 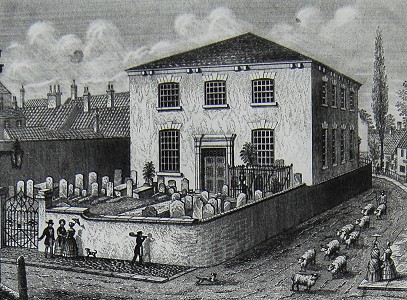 Baptist Chapel opposite the school, 1850

On the corner of Broadbank and Northgate, the one-storey building known in the twentieth century as ‘The Parish Rooms’ was demolished in 1981.  The site is now the Northgate Court flats.

This building had been a school established under the 1676 will of Dr Robert Mapletoft, Dean of Ely and a former pupil of Louth Grammar School.  Richard Gurnham wrote about the history of this school in his books ‘Victorian Louth’, and ‘Stuart and Georgian Louth’.  The first structure here would have probably have been a mud-and-stud thatched building, but in the eighteenth century it was rebuilt in brick and tile.  The school was effectively an endowed continuation of a former Tudor Petty School, with the intention that it should cater for all types of families, and that the master should be capable of preparing his pupils for entry to the Grammar School.

Mapletoft’s Free School opened here in about 1681.  Tuition was free but pupils had to wear clean clothes and shoes, which meant that initially the poorest children would have been unable to attend.  From 1689 there was money from a charity to teach six poor boys who would not otherwise have been able to attend the school.  These charity-funded boys were each provided with a blue suit, stockings and shoes, and were known as ‘Blue Boys’.

In 1790 the school received a boost when Thomas Espin, a 23-year-old farmer’s son from near Wragby, was appointed master.  He had already acquired skills of architect and land surveyor, and was a talented artist.  The number of pupils rose to about 40.  It remained a free charity school with focus for the younger boys on basic literacy and numeracy, but Espin also made it a commercial academy where older pupils learnt skills relevant to a career in the navy, or as a surveyor or architect.  Thomas Espin designed and built a new house on Eastgate, now the Priory hotel, and used his new home to provide accommodation for boarding pupils.

Espin remained master of the Mapletoft School until his death in 1822.  Many parents who would not otherwise have considered sending their sons to school now chose to do so.  One such parent was Adam Eve, shopkeeper and owner of the carpet factory, who sent all his three sons to this school.

In 1842, the newly-elected town council transferred to the Mapletoft School an endowment it had acquired from the former unelected corporation.  Hardie’s Charity stipulated that up to 45 boys should receive free education, and the school became known as the Hardie and Mapletoft School.

Another long-serving master, 25-year-old Samuel Cresswell, came in 1842.  Most of his pupils were poor children paying no fees but, like his predecessors, Cresswell also taught fee-paying boarding pupils.  The school remained part-charity, part-fee-paying for many years, until 1878 when the Charity Commissioners decided that the funding for free tuition should be transferred to the Grammar School.  Those parents who could not afford the fees therefore had to withdraw their children, but enough fee-paying pupils remained to make it possible for Cresswell to keep his school going in the same building, and he remained the master until 1900, when at the age of 83 he retired.

The second picture is one of my favourites.  Drawn in 1850 from almost the same location as the 1981 photo, it shows the Baptist Chapel on the south-western corner of the junction.  The chapel building was extended, but is still recognisable today, although sheep are no longer herded along Northgate!