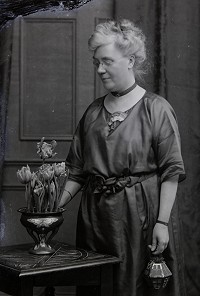 A blog post in November 2017 listed famous people associated with Louth.  The majority were men.  Here we look at eight gutsy women of Louth.  Not included in this list are Claribel (Victorian ballad composer) and Margaret Wintringham MP, as they have been or will be the subject of other blog posts.

Gertrude Esther Brain (what a wonderful name) was librarian of Louth Mechanics Institute from the 1890s to the 1940s.  Born in 1868, Gertrude moved with her family to Louth when she was a young girl.  Her father worked as a gardener.  Gertrude’s mother became Librarian to the Mechanics Institute in the Mansion House, 12 Upgate, and so the family lived on the premises there.  After Mrs Brain died in 1896, Gertrude took over her position as resident librarian, a role she continued for almost 50 years.

Ann Elizabeth Hardy was a farmer’s daughter from northern Lincolnshire, born in 1900.  In 1945 she moved to Louth to teach at the Girls’ Grammar School. In 1958 after the death of the previous long-standing headmistress, Miss Figgis, Elizabeth Hardy took up the post of headmistress.  Following her retirement in 1965, when the Girls’ and Boy’s Grammar Schools amalgamated, she became the first woman mayor of Louth.

Lettice Brown.  In 1833 Lettice Hales married widower William Brown, a house painter.  This union allowed William to stop full-time house painting and start work on his magnificent painting, the “Louth Panorama”.  Lettice would have looked after her husband’s children, the youngest of whom was only four, and she perhaps had some income of her own.  William can’t have been an easy person to live with – he was described as querulous, and can you imagine the two enormous paintings in their cottage in Vickers Lane.  Lettice died in 1847, the year that the panorama was completed.

Rebecca Marshall.  Rebecca Graves from Strubby married Benjamin Fotherby in 1813.  They established a printing business in the old Blue Stone Inn building on the corner of Mercer Row and Upgate.  After Benjamin’s untimely death at the age of only 41, Rebecca married Abraham Marshall, and the business continued in his name.  Abraham was considerably younger than Rebecca, but he too predeceased her.  Again, Rebecca continued the business.  Her 18-year-old grandson Thomas Burditt returned to Louth to assist his grandmother, and he soon became her business partner.   Rebecca retired in 1865, and died the following year aged 79.  The Burditt business thrived into the twentieth century.

Susannah Wallis.  Susannah was the daughter of William Crow, landlord of the Black Bull Inn (now demolished) at 22 Upgate, next door to the premises of woodcarver Thomas Wilkinson Wallis.  Susannah and Thomas married in 1845, and had a total of eight children of whom two died in infancy.  Thomas was dedicated to his intricate carving, and his autobiography describes his daily schedule, working from 6.15 am until 5.30 pm, with half an hour for dinner.  Susannah capably ran the family and supported her husband with his work as his reputation grew both in England and internationally.  No mention of Susannah’s health was noted by Thomas until he wrote in 1866, “My wife had been for a long time in delicate health, but not unable to perform household duties; on Saturday evening, whilst attending the children, she was suddenly attacked by spasms of the heart, … and died twenty minutes after the first attack”.  Her youngest child was four years old.

Laura Annie Dudding. Laura was a vicar’s daughter who in 1875 married Edwin Whitworth of Theddlethorpe, and they had six children.  Edwin was an agricultural engineer who invented the knot-tying mechanism which allowed corn reapers to bind corn into sheaves.  Laura published poetry and songs under her maiden name.  Her first two volumes were ‘Thought Waves’, and ‘Glimpses beyond the Veil’.  In her later years Laura took up her pen again to record the seasons and the landscape around her.

Margaret Ottaway MBE.  Margaret was the sixth of seven children of haulage contractor A W Jaines and his wife May.  One night in September 1941, tragedy struck when bombs from a German plane fell on the Jaines’ house in Grimsby Road.  Six members of the family were killed instantly, including Margaret’s mother and younger sister.  For decades Margaret has been a well-known and respected figure in Louth, talkative, friendly, community-spirited and opinionated, and often seen on her bicycle.  Margaret was mayor in 1996 and, even in her 80s, still an active member of the Town Council.

Jean Howard.  Born in Norfolk, Jean moved to Lincolnshire when a young child.  She worked for the library service for many years and has had tremendous influence in a wide range of local heritage ventures, including curator at Louth Museum 1989-2008, coordinator of the Ants & Nats lectures, Louth Civic Trust Council, trustee at the Orme Almshouses, SLHA Local History Team, Lincolnshire Heritage Open Days, Buildings Advisory Committee at Heritage Lincolnshire, Churches Conservation Trust, and Blue Badge Guide.  Jean has led many guided walks, bringing local history to life, and is in demand as a speaker.