The coming of electricity to Louth 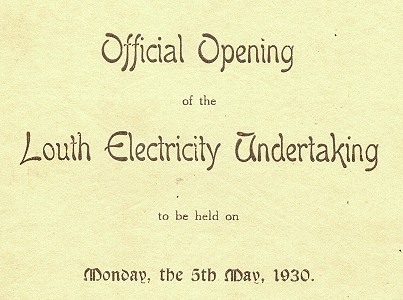 The municipal supply of electricity in Louth started in 1930.  In the museum collection we have the programme for the opening ceremony of the electricity sub-station in Mount Olivet on Monday 5 May 1930.  This was located just to the west of what is now Louth Hospital, a convenient site for the power lines coming from Grimsby.

The programme states “At twelve o’clock noon all the guests will assemble at the Electricity Sub-Station at Mouth Olivet, Louth, when Mr J P Beckett, Chairman of the Electricity Committee, will invite the Mayoress of Louth to open the Sub-Station and switch on the Current.”  This was to be followed by various presentations, luncheon in the Town Hall, opening of an electricity exhibition in the Town Hall, several other formalities, and culminating in afternoon tea.

There had been some electricity in Louth before 1930.  In particular the Palace Cinema (now Heron Foods) which opened in 1914, was the first building in the town to have electricity, with its own supply from a generator.  But most businesses and private houses had depended on gas and candles for their lighting.

A showroom, Louth Electric Service Ltd, was established at 18 Queen Street.  Their 1931 advertisement reads “Now is the time to have your house wired.  The Corporation Electricity Department will pay for the work being done and you can repay them in instalments spread over five years.  Send a postcard today and our representative will call and give you full information and advice without any obligation on your part.”

In David Cuppleditch’s book, “Old picture Postcards”, it is stated that Shamrock House in Ramsgate, the surgery of dentist Mr Goy, was the first establishment to be fitted with mains electricity.  In the 1930s electric streetlights gradually replaced gas lamps, and the installation of traffic lights (known at that time as “traffic control lights”) meant that policemen no longer had to undertake exhausting point duty.