John Naull and the eavesdrop stone 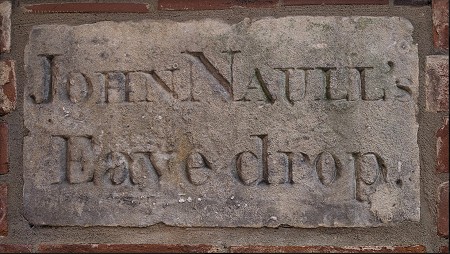 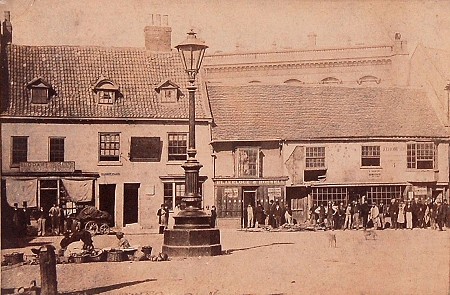 When asked to choose a favourite item in Louth Museum, former curator Jean Howard wrote, “an item that makes me smile is the eavesdrop stone.  It was part of John Naull's house, one of 'the six great houses of Louth', which was knocked down in 1865 to clear the site for the Market Hall.  The stone indicated that his ownership extended beyond the house wall to include the area where the eaves overhung.   It amuses me that neighbours have always squabbled over property boundaries, while I admire the wisdom of establishing your rights in masonry.”

The Naull family were businessmen, with an ironmongers shop in the Market Place.  It was in this house that John Naull in 1830 entertained William Cobbett, who was touring England in an attempt to reform Parliament and end the poverty of farm labourers.  As a result of this visit, Louth is described in Cobbett’s book ‘Rural Rides’.

To the immediate east of Naull’s premises was Eve & Ranshaw’s shop.  To the west was a small saddlery business and then the New Reindeer Inn.  The Naulls also had brick-making businesses in Charles Street and Eastgate, and commercial interests in Louth Riverhead.

Running a shop was not without its problems.  The following is one of several reports of pilfering.  In 1829, George Kent was charged with stealing a quantity of nails, several warming-pans, saucepans and a vast number of other articles, the property of Mr John Naull, ironmonger.  The thefts had taken place over a considerable length of time, and to such an extent that Kent was able to furnish a small shop in North Somercotes, where he resided.

There were three generations of John Naull, born 1746, 1773 and 1807.  The first John Naull, son of Thomas and Ann Naull, was in 1790 a patternmaker.  We know from a legal document in the museum that by 1809, the second John Naull was running an ironmongers business in Louth Market Place.  In 1837 Louth Town Council purchased the Naull property in anticipation of the building of the Market Hall, which was achieved nearly 30 years later.  The two senior John Naulls had died in 1830 and 1833, respectively.

In 1839, the third John Naull, John Dunstan Naull, who lived at Louth Park, married Susannah Wheatley daughter of the landlord of the New Reindeer Inn.  But the following year he died (surprisingly in Edinburgh) at the age of only 33, and was buried in Louth.

After the Naulls departure from the Market Place, their house and shop were rented by Henry Thompson who ran a furniture business, until it and the neighbouring properties – Blakelock’s saddlery and the New Reindeer Inn - were demolished in 1865.