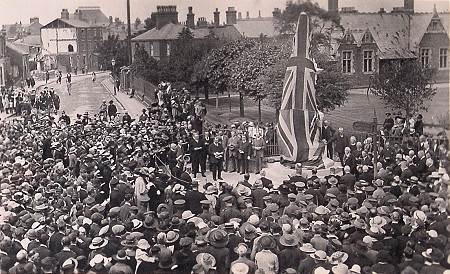 Unveiling the memorial in 1921 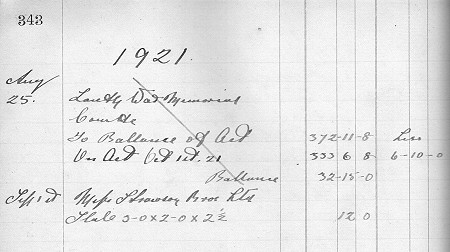 Record of payment to stonemason

The war memorial in Louth was unveiled on Thursday 4 August 1921.  This particular date was chosen because it was the anniversary of the declaration of war in 1914.

In Louth, the civic debate about how to commemorate those lost in the war had started in April 1919 with a public meeting led by the mayor.  It took many months to decide on the type of memorial (initially the favoured scheme was to construct public baths), to raise funds by public subscription, to commission architects and masons, and to erect the memorial.  The eventual unveiling of the memorial on the corner of Ramsgate on land belonging to the almshouses was a triumph for the people of Louth, and hundreds attended the unveiling, which was performed by the High Steward of the Borough, Major J St Vigor Fox.

The war memorial was designed by architect Harold Saunderson Hall, son of Louth baker Alfred Hall.  The soldier on the plinth was modelled on Regimental Sergeant Major George Frederick Jones, and sculpted by Robert William Ray.  The lower part of the memorial, on which the names are inscribed, was created by stonemason William Samuel Harrison.  Both R W Ray and W S Harrison were local craftsmen.  In Louth Museum we have the account book of W S Harrison, which shows that he was paid in instalments.  The image records the third payment of £372 11s 8d, from Louth War Memorial Committee to W S Harrison on 25 August 1921.

The memorial is inscribed with 209 names of dead and missing soldiers, and almost all families in the town had suffered as a result of the war.  In addition to those who had been killed, many returned servicemen had serious physical injuries and even more suffered mental health problems.  Then there was a flu pandemic at the end of the war, in which a quarter of the British population was affected, and about 228,000 people in Britain died.  And of course, in the Louth Flood of 1920, 23 people died and hundreds became homeless.  Sometimes we think of ‘The Good Old Days’, but the early 1920s would have been a difficult time for people in Louth.