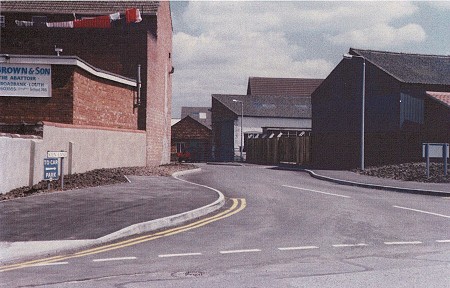 Abattoir (on left), viewed from Broadbank 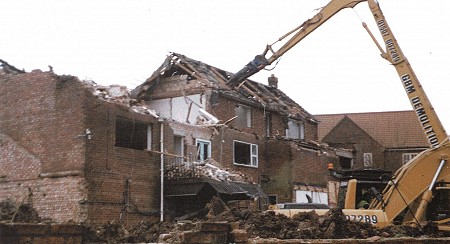 Paul and Wendy Warne, proprietors of Warple Press and Wolds Travel, have kindly donated to the museum copies of photos taken in the Kiln Lane area during the last 50 years.  So much has changed during that period.  The land now occupied by the Co-Op store and the car parks was formerly the site of an agricultural machinery business (Grounsells, then Morton, Son & Lock, and finally Burgesses) and two malt kilns.

Kiln Lane, adjoining Northgate (not to be confused with Kiln Yard off Queen Street), originally ran straight from Northgate.  When the area was redeveloped in the late-20th century, an additional entrance road was created from Broadbank.

Louth had several small abattoirs where animals were slaughtered.  The one run by Brown and Son on the western side of Kiln Lane, adjoining the road from Broadbank, is pictured here in about 1990.  All these small abattoirs have closed, and wholesale butchers L Brown & Son now operate in Lincoln.  The Kiln Lane slaughterhouse building has been demolished and replaced by modern housing.

When I asked Stuart Sizer to comment on a draft of this blog post, he told me that as a young man he was a pupil Public Health Inspector, and inspected the carcasses of slaughtered animals in all the Louth abattoirs, including Brown's.  He soon changed professions and became a well-respected primary school teacher.

Even before the 20th century redevelopments, there were no really old buildings in the Kiln Lane area.  Down by the river, the wet marshy land had remained undeveloped until the early 19th century.

If you find it interesting to see how Louth has altered during the last 100 years, do come and see our exhibition ‘Louth Then & Now’, a display of old photos of Louth, with modern photos taken in the same locations.  This exhibition will run from August 2021 until the end of the 2021 season.