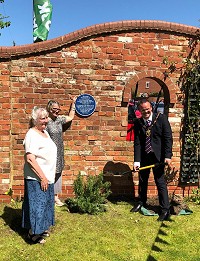 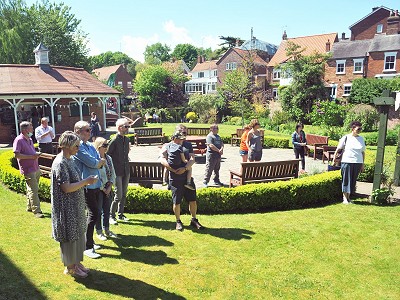 A plaque was unveiled in Spot Yard on Saturday 29 May 2021, exactly 101 years after the horrendous Louth Flood of 1920, in which 23 people lost their lives and hundreds became homeless.

The unveiling ceremony was performed by the mayor Councillor Darren Hobson, Anita Muchall (Chair of Louth Museum Volunteers) and Jess Mackett (Chair of Spot Yard Trustees).  The ceremony, attended by a small socially-distanced crowd, included the planting of a rosemary bush, a symbol of remembrance.  Later in the afternoon, a guided walk led by Dr Richard Gurnham, followed the path of the 1920 flood through the town.

Funds for the commemorative plaque were raised by Crowdfunding, organised by Richard Grimes.  Many thanks to all those who contributed towards this project.

We remember the 23 victims who lost their lives and also the 800 people who lost their homes and almost all their belongings. Many of these unfortunate people were accommodated under canvas in the area that is now “The Crescent” off High Holme Road.  You can find out more about the 1920 Louth Flood in a permanent display in Louth Museum.

One of the questions that people ask is, “Is such a flood likely to happen again?”  The answer is hopefully, “No”.  In the Flood Alleviation Scheme led by the Environment Agency and completed in 2017, there were major earthworks immediately to the west of Louth by-pass, which should prevent severe flooding in the future.