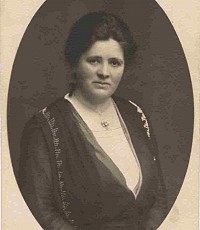 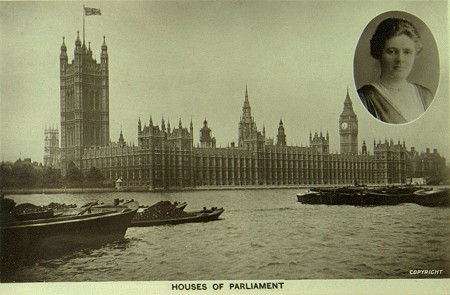 Mrs Margaret Wintringham had been the headmistress of a school in Grimsby, but when her husband Tom was elected MP for Louth at the by-election in June 1920, immediately after the Louth Flood, she moved with him to live in the village of Little Grimsby just north of Louth.  She became one of the first women magistrates in the country.

The following year, newspapers of 9 August 1921 reported, “Mr Tom Wintringham, MP for Louth, was sitting in the newspaper room at the House of Commons last evening, talking to Mr Myers, the member for the Spen Valley, when he gave a groan and collapsed on Mr Myers’ shoulder.  Dr Farquerson and other medical MPs were called at once, but could only declare that Mr Wintringham was dead.  The House adjourned in sympathy.”

Margaret was elected to replace Tom as the Liberal MP for Louth in September 1921.  She didn't speak publicly whilst campaigning because she was in mourning, and was known as the “silent candidate”.  She was the second woman MP to take her seat in the House of Commons.  Constance Markievicz was the first woman MP elected to Westminster in 1918, but as she was an Irish Republican, in line with Sinn Fein abstentionist policy she did not take her seat.  Nancy Astor, born in the USA, was the second woman elected to the Westminster Parliament.

Margaret Wintringham was passionate about women’s rights, and campaigned for the voting age for women to be reduced from 30 to 21, for women to be allowed to sit in the House of Lords, for state education scholarships for university fees and maintenance to be available for girls, and for equal pay.  She was instrumental in passing a law which allowed women police officers to be retained, after their temporary recruitment during World War I.

A major concern of Margaret Wintringham and the women’s movement was the sexual abuse of young girls by older men. In July 1922 Margaret intervened in the second reading debate of the criminal law amendment bill.  It sought to abolish the defence against charges of unlawful carnal knowledge and indecent assault that the male perpetrator had reasonable cause to believe that the underage girl was over sixteen.   Margaret raised the issue of the harm young victims suffered, not only from the offences committed against them, but also from the trauma of appearing in court and giving evidence.

Margaret successfully defended her seat twice, in general elections in 1922 and 1923, before losing in the 1924 general election to Edward Heneage - a well-known local man, and a Conservative.  She also stood in 1929 and 1935, and was President of the Women's Liberal Federation. She was highly active politically, and not just a one-term MP.  Margaret Wintringham’s achievements are recognised by a commemorative blue plaque on Louth Town Hall.

A Pathé news clip of her on the balcony of the Town Hall at the declaration of results, shows Margaret still wearing a mourning veil, and with the crowd with the Market Hall in the background.  https://www.britishpathe.com/video/VLVA8FTS86GGAK9Z48KX3XX9MLEX7-MRS-WINTRINGHAM-CONTESTS-HER-LATE-HUSBANDS-SEAT-IN-ELECTION/query/Margaret+Wintringham

Reproductions of Margaret Wintringham’s official postcard are on sale in Louth Museum.