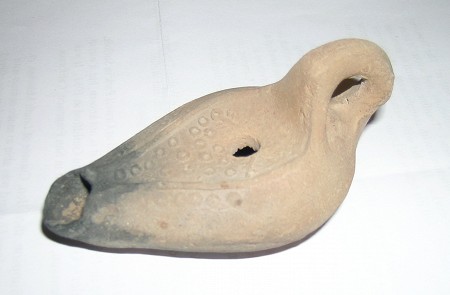 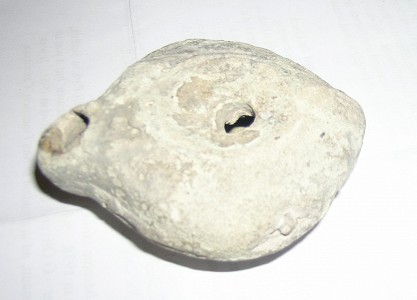 In the Roman display cabinet in Louth Museum are two little oil lamps.  There are so many items in the museum that it is easy to walk past without noticing, so let’s take a detailed look.

The lamps are small, only about 8 cm long.  They could be easily carried around, and placed where light was required.

Both our lamps are made of clay, and would have contained oil (usually olive oil) which was burned to produce light.

The essential components of a lamp are the wick, oil, a reservoir for oil, and an air supply to maintain a flame.  Wicks were usually a thread of twizzled plant fibres, possibly obtained from mature stinging nettles.  The wick was coiled inside the lamp and protruded out of the spout. The oil was carefully poured into the lamp through the central hole.

The wick soaked up the oil and you would light the end of it – rather like lighting a candle.  In the first photo, you can see the blackened area where the wick has been burning.  As it burned, the wick had to be pulled out at intervals, to keep it from falling back into the oil.

One of these two lamps has a handle, but both lamps are rather plain.  More elegant designs were decorated with images of gods or animals, or abstract patterns.

Roman lamps were made using a two-part mould.  Wet clay was pressed into each half of the mould and then the two were joined together.  After allowing the clay to dry slightly, the moulds were removed and the oil-hole was pierced by hand.  To harden the clay, it was was baked in a kiln.

Oil lamps first appeared during the Stone Age, and initially were just a stone dish with a floating wick.  Gradually they took the form of a clay dish with a pinched or folded rim which held the wick in place, thus controlling the flame and reducing smoke.  As they evolved, clay lamps became more enclosed, so reducing the risk of oil spillage.

Oil lamps were a common household item in Roman times although, compared with other parts of the Roman Empire, archaeologists find fewer lamps in Britain, because oil was scarce and expensive here.

Lamps were used both indoors and outdoors.  Business owners, such as innkeepers, used oil lamps to light their premises as well as the streets nearby.  Wealthy families used lamps in their houses and gardens.  Soldiers used them in forts and military encampments.  In temples and shrines, oil lamps had a religious significance as well as being functional.

Are you wondering how the Romans lit their lamps?  Matches and lighters that we use today weren’t invented until much later.  The easiest way would have been to take the unlit lamp to the fire, and briefly put the end of the wick into the flames.  The alternative was to use a “fire striker”, which was a piece of metal that was struck against a flint, producing enough sparks to light the oil-soaked wick.