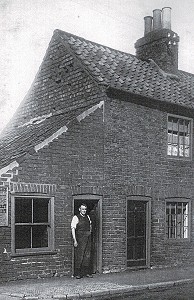 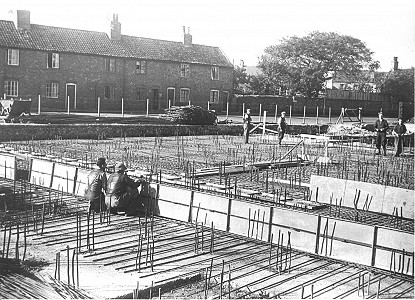 There are some parts of Louth that look almost the same as they did 100 or more years ago.  I am thinking here of St James’ Church and The Masons Arms Hotel.

Other places have changed beyond all recognition.  One area that has been redeveloped TWICE in the past 100 years is the western side of Newbridge Hill, opposite the Aldi car park.

In the early 20th century there was a row of cottages along Newbridge Hill, known as Sharpley’s Row.  Few photos were taken of working class housing at this time, but we are fortunate to have the photo of a man standing at the door of his workshop, in about 1910.  This man was Albert Batchelor, a boot-maker.  Born in 1877, Mr Batchelor lived in No 8 Newbridge Hill, along with his wife, their daughter Emmie, and Mrs Batchelor’s parents.

Sharpley’s Row can be seen in the background of the second photo, which was taken in 1950 to show the laying of the foundations for the enormous concrete Malt Kiln on the opposite side of the road.

The row of terraced cottages, Sharpley’s Row, was demolished in 1958 under the Borough of Louth’s Slum Clearance Scheme.

The Linpac factory was built on the cleared site.  It was a very successful company that produced paper packaging for local food producers, and several Louth residents remember working there.  The company grew, moved to larger premises by the Northfield roundabout on the Grimsby Road, and became known as DS Smith.

The Linpac factory on Newbridge Hill was demolished in 2003, to be replaced by the present houses.

Newbridge Hill is one of the areas of Louth featured in the exhibition, “Louth Then & Now” which shows “old” photos and “new” photos taken in the same location.  The exhibition is on display in Louth Museum until the end of the 2021 season.