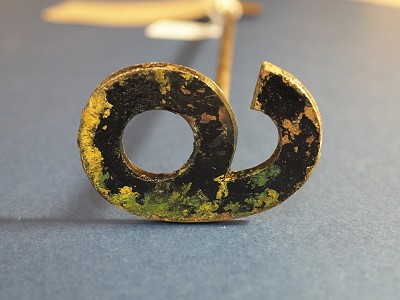 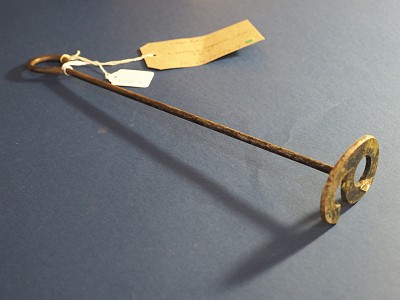 This particular set of irons came from Louth cattle market, and would have been used to apply temporary paint numbers to animals before they went into the auction.

The more usual method of branding was “hot branding” to create a permanent identification mark.   A set of numerals such as these would give a unique identification number to each animal; and in addition, in order to prevent theft or enable sorting of animals that grazed on communal pastures, a symbol or initials may have been used to indicate the owner of the animal.

In the traditional method, the branding iron was heated in a fire and then pressed onto an area of the animal so the skin and coat were permanently marked.  This method of identifying cattle and horses was largely replaced in the second half of the 20th century by the more humane method of freeze branding using an iron chilled in dry ice or liquid nitrogen.

Branding is less common now, since in the UK by law all calves must be identified soon after birth with a durable pair of ear tags (both ears in case one tag is lost) and be issued with a passport.  Cattle are identified to ensure that products going into the human food chain are fully traceable and safe to eat, and to enable tracking of diseases, particularly bovine tuberculosis (TB), bovine spongiform encephalopathy (BSE) and foot-and-mouth disease (FMD).  Some freeze branding of dairy cows is still undertaken as it makes identification quick and easy.

The word “brand” derives from “firebrand”, a burning piece of wood.  Branding is an ancient practice dating, in Britain, at least from Roman times.  The Romans used branding to identify slaves, and in medieval Britain prisoners were branded, a practice that continued until its abolition only in 1829.