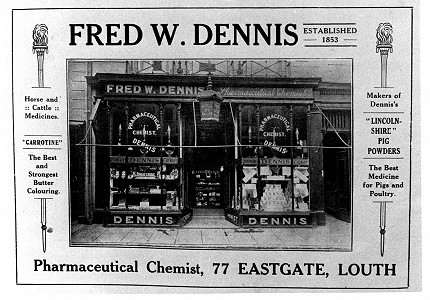 The shop in Eastgate, Louth that is now ‘Argos’ was a chemist’s shop, and from the early years of the twentieth century was run by Fred Woodrow Dennis, who had taken over the business from his father John Woodrow Dennis.

J W Dennis’ remedies were widely respected and sought after.  His Lincolnshire Pig Powders invented in about 1883 for the control of intestinal worms were for decades sold not only throughout the UK, but also internationally.  John’s son Fred qualified as a pharmaceutical chemist in 1889 and took over the retail business in 1900.  Fred Dennis died in 1935, but the chemist’s shop continued as ‘Gordon Lock’ and then ‘Selles’.

Fred’s recipe book, a small well-used notebook is inscribed with the date 1918.  It has scores of handwritten recipes of medicines for people and animals, and of household products.  Examples of these three types of recipe are Mouth Wash, Ringworm Ointment for Cattle, and Waterproof Composition for Oil Coats.

The recipes are fascinating, but are difficult to understand as many terms are written in Latin and are abbreviated.  Scott (student volunteer) painstakingly transcribed all the recipes.

Shown here is the recipe for a balsam sold to treat thrush, a common and uncomfortable yeast infection.  The transcription is

Rhubarb and honey have been used in medicines for centuries, and their beneficial effects are many and various.  Boracic powder or borax is a naturally occurring mineral, sodium tetraborate, which has been an ingredient in cleaning products to control mould and mildew, but it is now known to have toxic side-effects.  A drachm is 4.4 grams, a grain is 0.06 grams, and an ounce is 28 grams.

It is not stated if this remedy was intended for the treatment of external thrush of the genital areas, or internal thrush in the mouth.  Quite possibly it was sold for both.

In contrast, the active ingredients in modern remedies for thrush are anti-fungal compounds first synthesised in the 1950s and 1960s: clotrimazole, nystatin or miconazole.

It is easy to forget how radically health remedies have changed in the last 100 years.  It was in 1928, ten years after Fred Dennis started using this recipe book, that Alexander Fleming discovered penicillin, and this was followed by the development of pharmaceutical antibiotics and other seemingly-miraculous modern medicines.

We are grateful to Vicky Ford for her pharmacological input.