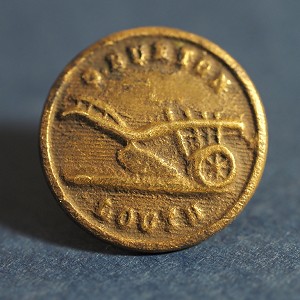 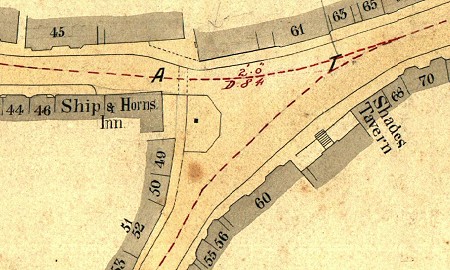 A few months ago, Greenwich House School gave to the museum a small metal button that they had found in the school grounds in High Holme Road.  Only 15 mm in diameter, and with a metal ring on the reverse, this may have been used as a button, or more likely as a cuff link.  It has a raised image of a simple, one furrow horse-drawn plough, and bears the inscription G Burton, Louth.

G Burton was George Burton, a tailor who had a shop in Louth’s Fish Shambles.  In the 1871 census he was described as a “master tailor employing nine men”.  The address of the business was given in the 1869 directory as “49 Eastgate”.  The numbers of the shops in Eastgate have changed over the years, but we know from the 1870s sewer plan (shown here) the exact location of No 49.  It was next to the Ship and Horns Public House.

George Burton had been born in Louth in 1816, the son of an agricultural labourer.  As a child, he lived with his parents John and Jane Burton in a cottage in Nichol Hill.  George started work as a tailor’s assistant and, working his way up, took on the tailoring business in the Fish Shambles in the 1840s.  By 1851 was employing three men.  The business thrived, and George and his family moved from the Fish Shambles to live in George Street, an area where some of the more wealthy residents of Louth chose to reside.